Runners came from near and far to support causes and each other. 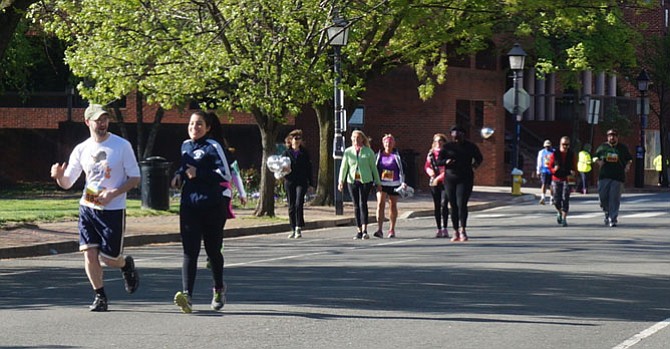 Participants in the GW Parkway Classic make their way along Union Street April 24 as they near the finish line at Oronoco Bay Park. Photo by Jeanne Theismann. 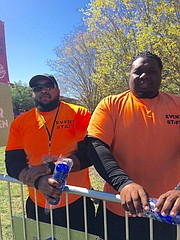 Two volunteers from Alexandria, James Darling and Reginald Maye, have worked at the George Washington Parkway Classic for 16 and 11 years respectively.

They came from as far away as Cali, Colombia and Bristol, England. They were from Arlington, Burke, Alexandria, Lorton, Reston, Falls Church, and from Colorado and Canada. They were old — 88 — and they were young — 12 year olds and babies in strollers. One woman from Silver Spring was running at 7 months pregnant. One runner was blind.

The Star Spangled Banner resonated across a crowd of 5,330 runners in the sunlight near George Washington’s home; American flags snapped in the breeze. People had goosebumps, and not just from the cold air at 7 a.m. because the most moving thing about the George Washington Parkway Classic, now in its 32nd year, was the number of runners who came out to support veterans, the poor, the sick, and the homeless.

The race was supported by an army of volunteers, some of whom have been coming for 20 years. They handed out water and gatorade. The moving company “Two Men and a Truck” took runners’ belongings and transported them. Starbucks served coffee. And all along the track, residents came out to cheer on moms and dad, grandmothers and grandfathers, neighbors, and team members.

Sometimes called the "Prettiest run this side of the Potomac," the annual George Washington Parkway Classic 10-Mile and 5K races are for serious runners, new runners, and runners with a cause. The 10-mile race starts in Mount Vernon, and passes through Riverside Park, Fort Hunt Park, Collingwood Park, the Dyke Marsh Wildlife Preserve, on past Windmill Hill Park and Founders Park before coming along the finish line at Oronoco Bay Park in Old Town, Alexandria.

And that’s when the party began. The runners drank water and ate snacks handed out at the finish line. They took pictures with their teams, and listened to the live band, The Joe Chiocca Band, which did some great “rootsy rock” numbers, and were given a free brew by the Port City Brewing Company. And they met up with other runners, comparing times and causes. One local Alexandria resident was just glad to finish: Donald Trilling, 88, who has been running the race since 1987, and who was honored with running bib number 1— didn’t come in last.