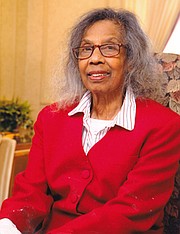 Dr. Yvette Fay Francis-McBarnette, known for her ground-breaking work in treating Sickle Cell Anemia, died in Alexandria on the afternoon of March 28, 2016 surrounded by her loved ones. She was weeks from her 90th birthday.

Born in Jamaica in 1926 to Clarence and Sarah Francis, she immigrated to the United States as a young child with her parents and became an American citizen. She grew up in Harlem, New York City, where she attended St. Philip's Episcopal Church. There she married Olvin McBarnette, her husband of 60 years, and together raised their six children in Queens, New York City.

Dr. Francis was a pediatrician with a clinical specialty in hematology. Her focus was Sickle Cell Anemia, an inherited blood disorder affecting primarily people of African and Mediterranean descent. In 1966, she launched the Foundation for Research and Education in Sickle Cell Disease to promote testing, research, public education and patient services. Dr. Francis’s work came to influence national policy when she was invited to be a member an advisory committee on Sickle Cell to the Nixon administration. Soon after, the National Sickle Cell Anemia Control Act of May 1972 was signed.

Dr. Francis owned and operated the St. Albans Family Medical Center in Queens, New York City. She was the director of the Sickle Cell Clinic in Jamaica Hospital in Queens. She received numerous awards and accolades for her service to her patients and the community.

Known as Fay to her friends and family, she enjoyed singing, playing the piano, and playing the card game bridge at tournaments at her summer getaway home in Martha’s Vineyard. She was a life-long learner who in her mid-70s took philosophy classes in the graduate program at Hunter College. In 2003, she moved from New York to Alexandria with her husband to be near her grandchildren. She was deeply religious. She enjoyed Bible study and singing in the choir at the Episcopal chapel of Goodwin House, the retirement community where she lived with her husband.

Dr. Francis leaves behind to cherish her memory her loving husband Olvin McBarnette; her children Bruce, Camilla, Yvette, Elayne Sara, Ellen and Andrea; her grandchildren Nettie McMiller, Baily and Taylor Moore; her brother Mac Francis; and numerous nephews, nieces, extended family and friends. Her Memorial Service will be held on April 30, 2016 in Alexandria.