Arlington to get subgroup results April 14.

There is optimism that consensus on the relocation or renovation of Fire Station 8 in High View Park is near, according to Alisa Cowen, one of the Task Force 8 members. Cowen said Task Force members had raised so many significant issues during their subgroup meetings that the issue, once fairly simple, became a complex “Pandora’s Box” of intersecting problems. That’s good news, according to Cowen, who thinks the outcome will be much more holistic for the community. 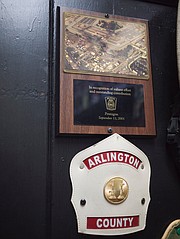 Task force members were surprised to find, at the beginning of the process, that most of the data provided to the task force was either out of date or incorrectly analyzed, Cowen said. The response times were not what the data said they were. But more importantly, the task force members began to realize the problem was much bigger than “where should this fire station be located?”

At recent meetings other issues arose as the discussions evolved: the OPTICOM infrared transponders that were put in place 15 years ago after 9/11 are now outdated in terms of technology. It is taking more than two minutes for the 911 call center to respond to calls and dispatch the calls to the appropriate stations: it should take less than 60 seconds. The oxygen recharging equipment at Fire Station Eight is for the whole county and should be located near a densely populated center like Rosslyn or the Pentagon, where a future incident in a high rise or underground facility requiring oxygen would be most likely.

Cowen said the open discussions and Q&A’s with the fire chief and Arlington County staff about these additional issues helped focus the subgroups: the Task Force 8 effort was a positive experience because members of the task force saw the best of Arlington’s citizens — and the power of those citizens coming together — and the best of Arlington County’s staff and leadership collaborating with those citizens — to achieve an outcome that was better for the county.

Part of the reason for this, Cowen said, was Noah SImon, who volunteered his time to reach out to citizens, and in one case, had to be the sole member of the History Subcommittee. Simon told Task Force members that he was too young to remember the era of segregation and civil rights protests, but that what he had learned about the history of Fire Station 8 showed him that the history of that era was something all can learn from and should preserve.

On April 14, the subgroups will report out to the task force and that meeting, open to the public, will provide powerpoint presentations followed by a 30-minute Q & A session. The “site” subgroup, which addressed whether the current site or a different one, would work best for the fire station, will present drawings by the county showing they can build a fire station on the site which would meet the needs of the community. Earlier views that the property was not adequate appeared to have been premature.

The finance subgroup will respond to the issue of whether building a new fire station on the site will in fact cost more than moving to a different location.

The response time subgroup will address what the right measure is of demand and response is. The subgroup took into account the Virginia Hospital land swap, the ongoing Lee Highway Alliance master planning initiative, and the changing density requirements it would entail: High rise- high density buildings requires different equipment.

The task force is still a work in progress, but members believe it will meet its May deadline for a final report to the County Board. Some of the issues still at play include flexible positioning of equipment based on the demand data (if there are more medical emergencies in one area at one time of day, then equipment would be positioned to handle that), use of motorcycle medics to reach areas faster with medical aid, and taking into account that the nighttime population in Rosslyn is different than the daytime population. Another idea on the table is use of county vehicles, which are on the road all day, armed with automatic external defibrillators to make response time shorter.

The meeting on Fire Station 8 will take place from 7-9:30 p.m. at Marymount University, Crowley Hall, Classroom G127. The public is welcome to attend.