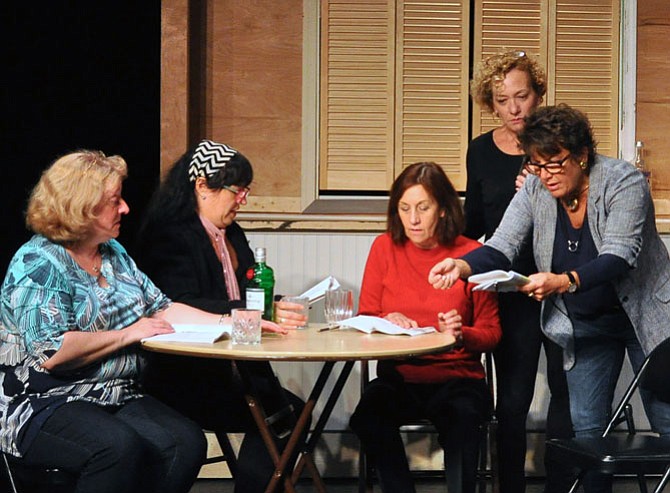 From left -- Gayle Grimes as Jessie, Joanna Snitzer as Cora, Michelle Fletcher as Ruth, Barbara Gertzog as Celia and Jayne Victor as Chris in the Providence Players production of ‘Calendar Girls.’ Photos by Chip Gertzog/Courtesy of Providence Players of Fairfax County

Opening its 18th season, the Providence Players are in a heartfelt, uplifting comic mood presenting “Calendar Girls.” It is about women’s friendships along with the power of imagination, risk-taking and resourcefulness under trying conditions.

The comic play, about human triumph after a loss, has been on the Providence Players list to produce for several years. The theater troupe is one of the first community theater groups to obtain the rights to produce the show.

“Calendar Girls” written by Tim Firth is based upon a true story; later turned into a movie about unusual events that took place in a small village in Great Britain. A local women’s organization wanted to raise funds to help those in need. The group came up with a novel way to get donations; produce an unconventional calendar that soon attracted worldwide interest.

Directed by Michael Donahue, who described it as a “wonderful play with many strong roles for women…with universal themes about changes that can take place in the inner person when there is a need. It clearly shows how one person can and does make a difference in the lives of others.”

Many in the 13-member cast are making their Providence Players debuts. Several originally hail from Great Britain knowing of the real life “Calendar Girls” background story.

In a recent interview, cast members described their various roles as colorful, if not quirky characters. All agreed it was a “very empathetic play.” Michelle Fletcher, from England, “gets to play a liberating character; who is somewhat of a ‘tart’ in her own way.” Fletcher described her role as “a challenging one with plenty of physical movement and energy.”

Barbara Gertzog plays “the trophy, pleaser wife who is learning to throw off the restrictions of her upper class mores.” As the play progresses her character becomes “a very believable person.” Jayne Victor, Providence Players board chair and actor in “Calendar Girls,” described how “the play presents strong friendships among the women characters, as well as how they became comfortable in their own skin.”

The cast nodded in agreement when Gertzog said they wanted “the audience to be mesmerized.”