Silvia Raquel Corella Erazo, 72, of Reston, was killed when she tried to walk across Wiehle Avenue to the Metro station around 6:25 a.m. on Wednesday, Oct. 21, according to Fairfax County Police.

“This crash investigation is ongoing. Neither speed nor alcohol appear to be factors in the crash. There are no crosswalks at this location,” according to police reports.

Officers were called to Wiehle Avenue near Chestnut Grove Square for the report of a woman struck by a vehicle. Detectives from the Crash Reconstruction Unit are investigating this crash.

At this point in their investigation, “it appears a 30-year-old Sterling-area man was driving a 2005 Honda Accord south on Wiehle Avenue toward the Metro station around 6:25 a.m. when he drove past the entrance of the Chestnut Grove community complex,” according to police reports. “The woman was transported to Reston Hospital Center with life-threatening injuries and died a short time later.”

OCTOBER IS the leading month for pedestrian-involved incidents in Fairfax County.

“With the arrival of autumn and milder temperatures,” said Captain Michael Grinnan, commander of the Department’s Traffic Division, “we typically see an increase in the number of people out walking, bicycling or jogging. With shorter periods of daylight now, motorists, pedestrians and bicyclists need to be more cognizant of each other and share the road.”


THE POLICE DEPARTMENT will be participating in a regional pedestrian and bicycle safety initiative, known as the Street Smart Campaign, starting on Tuesday, Oct. 27.

The Department’s goal is to improve safety for pedestrians and bicyclists of all ages and abilities. Officers assigned to each of the eight district stations and the Department’s Traffic Division will be on the lookout for motorist and pedestrian behaviors that have historically been known to contribute to pedestrian-related crashes, according to Fairfax Police.

Examples of some behaviors include: failure to cross at a marked crosswalk or intersection, pedestrians unlawfully using the roadway for travel where sidewalks are available, distracted driving, failure to yield to pedestrians in a crosswalk, reckless driving, driving while intoxicated and speeding.


The police report that the National Highway Traffic Safety Administration says 4,735 pedestrians were killed in traffic crashes in 2013. In Fairfax County, there have been more than 400 pedestrian-related crashes since 2012, according to Fairfax County police.

“Many of these crashes are preventable. By utilizing sidewalks for travel, crossing at a marked crosswalk or a controlled intersection, pedestrians could potentially help us to reduce the number of pedestrian-related crashes by as much as forty percent. By focusing on distraction-free driving and being alert for pedestrians and bicyclists, motorists could potentially help us to reduce that number by approximately the same percentage,” according to police. 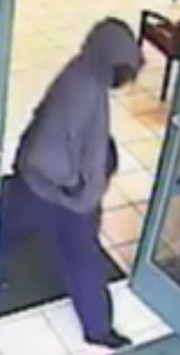 Detectives responded to a report of an armed robbery at the United Bank located at 11820 Spectrum Center in Reston, on Saturday, Oct. 24 shortly after 10:30 a.m., according to Fairfax County Police reports.

“A man entered the bank, produced a handgun and demanded money from several tellers. An undisclosed amount of money was handed over to the suspect and he fled on foot,” according to police reports. “The suspect was described as black, approximately five feet, five inches tall, thin to medium build, thin eyebrows and a ‘lazy eye.’ He had something covering his mouth and part of his head. He was wearing a green or gray hooded jacket, a dark shirt underneath and dark pants.”

ANYONE WITH INFORMATION on the bank robbery or pedestrian fatality is asked to contact Crime Solvers electronically by visiting www.fairfaxcrimesolvers.org or text-a-tip by texting “TIP187” plus your message to CRIMES(274637) or by calling 1-866-411-TIPS(8477), or call Fairfax County Police at 703-691-2131.