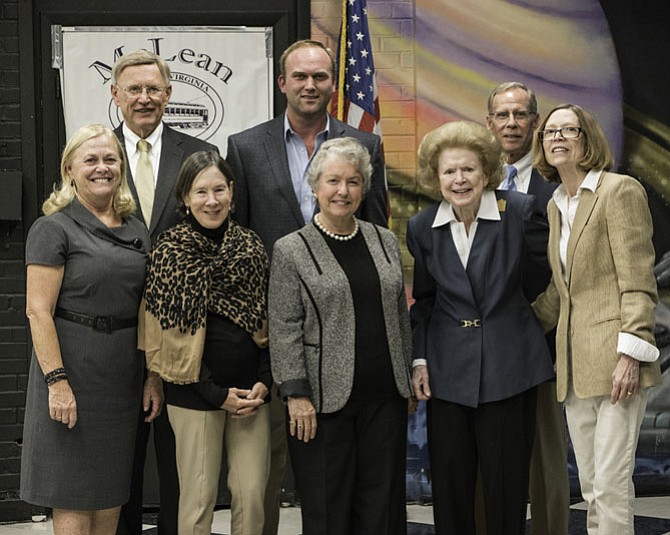 The McLean Historical Society and the McLean Community Center (MCC) celebrated the 25th Anniversary of the Old Firehouse Teen Center with dozens of residents in attendance on Oct. 13.

Supervisor John Foust noted his pleasure that a historic building was being used to serve both area teens and others, including the Lewinsville Senior Center and the SPARC program.

“It’s formerly an operating fire station and when the county built a new fire station several citizens worked together to convince the county to preserve the old station rather than sell it off to a new developer,” said Supervisor John Foust.

“Their vision was center for youth to gather. It’s been operating quite successfully every year since [as a place] for young people in McLean to go,” he said. “Rather than go to an empty home, it’s a place youth can go after school when their parents are working.”

Paul Kohlenberger, president of the McLean Historical Society, made a presentation about earlier efforts by the community to serve the teen population, including a proposed temporary MCC teen center that would have been located behind Redeemer Lutheran Church.

Kohlenberger introduced Janie Strauss, who, as former chair of the McLean Citizens Association's Education Committee, had been a strong early advocate of the project. Starting in April 1989, Strauss donated her time to the MCC as the Teen Center's project coordinator. She recounted her research on other such facilities, and her difficulties ensuring the County would allow the old firehouse to be used for the teen center.

“A tough, but fun and very worthwhile undertaking,” said Strauss.

Former Dranesville Supervisor Lilla Richards noted that the first hurdle was ensuring that the Board of Supervisors did not sell off the former home of the McLean Volunteer Fire Department. Richards considered the Old Firehouse Teen Center to be among her proudest achievements while in office, and she exhorted those in attendance to keep working to preserve it for future generations.

”This is quite a story. I want it to continue.”

“To me, this is quite a story,” she said, a week after the event. “I want it to continue.”