Helping People to Better their Lives 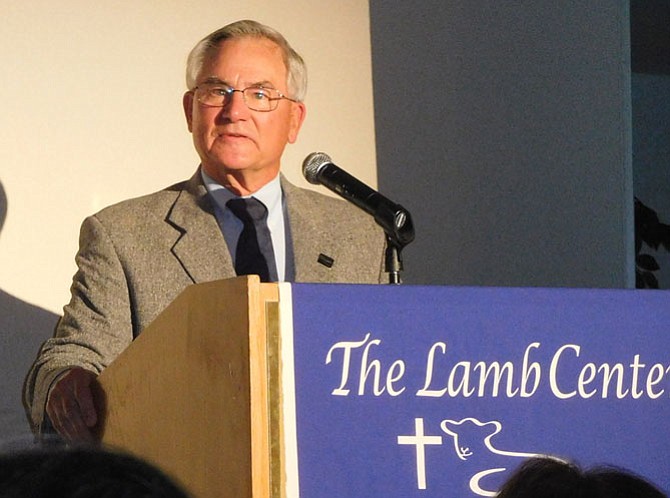 Allen Griffith spoke of next spring’s open house in the new building. Photo by Bonnie Hobbs.

The Lamb Center initially began as a ministry of Truro Church, serving some 20 people. Eventually, it became supported financially and with volunteers from about 100 churches, more than 1,000 individuals and dozens of local businesses.

However, with the new property costing $1.5 million, and buildout and furnishings, $3 million, the Lamb Center needs $1.5 million to pay off its bank loan. To contribute to the building fund, go to http://www.thelam...">www.thelambcenter....

Last week’s Lamb Center Celebration Banquet at the Waterford in Fair Oaks was aptly named. That is because this organization that ministers to the poor and the homeless has a great deal to celebrate.

For more than two decades, The Lamb Center in Fairfax has been a daytime, drop-in shelter offering hot meals, showers, laundry services, and recovery and employment counseling. But next spring, it will move from its current rented site on Old Lee Highway to a new and larger building on Campbell Drive.

And last Tuesday night, Oct. 6, some 500 people gathered to share in the joy. Recognizing the staff and volunteers, Lamb Center Board of Directors chairman Kelly Johnson said, “They love each other and our guests there unconditionally.”

“When people come to the Lamb Center, they feel isolated, and we try to meet their spiritual and physical needs,” said operations director Dave Larrabee.

“I love coming to work every day,” added Lamb Center assistant director Patti Brown. “It’s incredible to see how the Lord moves among the guests and staff.”

Johnson, who has led Bible study there since 2008, said, “We try to help our guests move into a better place in their lives.” Indeed, said Lamb Center executive director John MacPherson, the organization’s theme is “hope and a future.”

“The hardest thing about being homeless is being ignored,” he said. “Three thousand people a day are living in poverty here, in one of the richest counties in the U.S. Our mission is to serve the poor and homeless, transform lives and share God’s love. We started in 1992 in a 1,100-square-foot pawn shop with little more than strong coffee and mighty prayers. And by 2000, we moved into a 3,200-square-foot building at Fairfax Circle.” 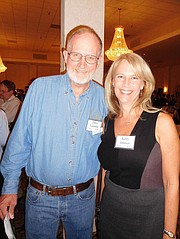 Dave Larrabee and Kelly Johnson at the banquet.

MacPherson said more than 60 percent of the guests suffer mental illness and about 20 percent are veterans or ex-offenders. Barriers to their having homes include the high cost of housing here, low disability payments and lack of transportation.

He’s proud of the Lamb Center’s accomplishments, but the larger, two-story building will enable it to offer more services. “We focus on self-sustainment, so we’ll be adding a clothing closet and a food pantry,” said MacPherson. “We’ll also have office space for our staff and hope to add dental care and a nurse practitioner in the future.”

There will be a great room where meals are served, plus rooms for classes and social workers. And the kitchen, laundry and bathrooms will all be larger. The facility will be open Monday-Friday, 8 a.m.-3 p.m.; and Saturday, 8 a.m.-12:30 p.m., with four full-time staff members and four volunteers there at all times.

“The Lamb Center offers immediate and necessary services for the poor and the poor in spirit,” said Veterans Association representative Stephanie Carl, who finds homes for veterans in Fairfax County. She mentioned a Gulf War vet who didn’t like shelters, but came to the Lamb Center for a meal. “We helped him and now he’s going to get housing and be reunited with his family,” said Carl. “All this is possible because the Lamb Center serves as the central hub for services. We’re blessed to have it in the county.”

Jeannie Thrall, the center’s assistant director for case management, said the guests come from all walks of life “and we’ve learned not to make assumptions about them. We’ve served a former surgeon, two nurses, a psychologist, teachers, an ex-pro athlete and a government contractor who lived in his car so he could pay college tuition for his three children.”

Then, introducing some people who’ve been helped at the Lamb Center, Thrall stressed their “grits and guts. They can each take credit for their own support, along with God and the Lamb Center.” 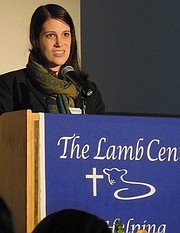 BUS DRIVER Scott Downey went there after losing his home and job. “I was nervous and uncomfortable, but the staff welcomed me,” he said. “I was able to get cleaned up for a job interview. The meals and encouragement helped me, also. I now work for the Fairfax Connector. The Lamb Center’s been like a family to me. During my darkest times, their Bible study really lifted me up.”

Marjorie Lormine was a home health nurse, but her marriage failed, she lost her job and housing, the county placed her daughter in foster care and Lormine was diagnosed with mental illness. Eventually, though, the Lamb Center helped her find a job and a room to rent. “Their encouragement and prayers helped me not give up,” she said. “When life seems too difficult, the Lamb Center is a good place for me to come, talk and meet people.”

Likewise, Brent Greer noted the “sense of community” he found there. “I became homeless and physically and mentally shattered,” he said. “I know the experience of being on the street and not being able to shower and put on clean clothes. I was working at temporary jobs and was filled with anger and resentment. The Lamb Center gave me coffee, something to eat and transportation tokens. It’s the best place to be for good people and camaraderie.”

Former Board member Allen Griffith said Fairfax County committed to pay $500,000 toward the new building. “And by late next spring, we’ll hold an open house,” he said. “Together, my friends, we will make this happen.”

Larabee then thanked God for “the many miracles we’ve experienced and the doors You’ve opened up for us. Thank You for the many wonderful people who support this ministry and for the love that flows in and out of the Lamb Center.”

Afterward, Johnson said the fact that “we’re outgrowing our current venue is symbolic of how the community’s supported us. Caring for our homeless neighbors has become part of this community, and it’s an exciting time to be part of the Lamb Center family.”