”Ever since I was a kid, Halloween has always bigger than Christmas.” 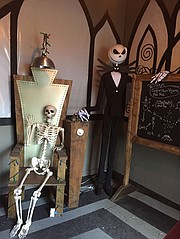 Characters from the movie, “The Nightmare Before Christmas,” reside in rooms in the haunted house.

Each October Haynes Davis turns the parking lot of American Plant in Bethesda into a wonderland of fear. He designs a haunted house to spook and entertain clients as they make their way through rows of pumpkins, gourds and mums. It’s a task he takes seriously.

“Ever since I was a kid, Halloween has always bigger than Christmas,” said Davis. “My mom was always collecting witches and other Halloween decorations.”

“After the show we work on the layout and decide what elements are going to be in the main rooms and where those rooms are going to be located,” said Davis, who is a general manager at American Plant. “My garage at home is pretty scary with all the mannequin parts and other accessories that we use for Halloween.”

Construction starts near the end of July and continues until the end of September, and the haunted house opens at the beginning of October. Creating the haunted house each year is a time honored tradition for the staff. “A lot of people have been doing it for years,” he said. “Each year there’s a different theme.” 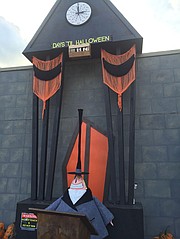 Planning for the elaborate haunted house begins in March.

The theme for this year’s house is “The Nightmare Before Christmas,” which was inspired by the movie of the same name. Characters from the movie reside in rooms in the haunted house, including a two-faced mayor and a skeleton known as the “Pumpkin King.” Each piece was handmade by a staff member.

“The biggest thing for me as a manager is that it is a great teambuilding project,” said Davis. “So many of our staff members spent time painting it and working on it. Everybody helped.”

“We use a lot of controls to make it entertaining. The mayor at the front of the house has a head that turns and a controller that controls the timing, said Davis. “We record him talking and the controller hooks to lights and there’s a motion sensor.”

Last year, Davis and his team built a towering kraken from the movie “Clash of the Titans” and another year he designed an X-wing star fighter from the Star Wars trilogy. The props were large enough to be seen for blocks.

The haunted house is free, but donations are accepted. All of the money collected will be donated to Light the Night, a fundraising campaign to benefit The Leukemia & Lymphoma Society (LLS).

A free movie night is planned for Saturday, Oct. 17 at 6:30 p.m., showing the “Nightmare before Christmas,” with popcorn and cider. The store will be open for parents to shop. American Plant is located at 5258 River Road.