But this time without fainting. 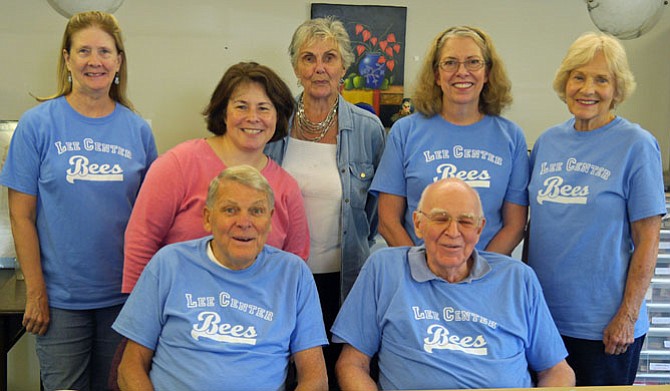 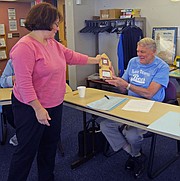 Adrianna Carr, director of Lee Senior Center on Lee Highway, presents the first place award to Jim Shey who had just won a sudden death spell-off with Tom Kerwin. They had completed 43 rounds with no errors in the Lee Center’s Spelling Bee Competition Oct. 7.

It was a sudden death spell-off between two contestants who had gone through 43 rounds with no mistakes. The word was felicific. Tom Kerwin begins f-e-l-i. He pauses and he doesn't finish. Jim Shea is declared the winner of the Lee Senior Center Spelling Bee Competition on Oct. 7. He had made it through soliloquy and his next word would have been missal. Except for a late arrival to the group, they had been meeting every month for the last year to practice the 1,000 potential words on the list. Mercantile, heinous, vehement, connoisseur, insouciance, verisimilitude, avoirdupois. They all agreed they didn't even know what felicific means (causing happiness). 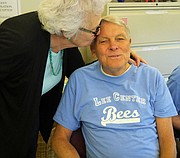 Jim Shea, winner of the Lee Senior Center sudden death spell-off on Oct. 7 receives a congratulatory kiss from his wife Phyllis. Shea says he won second place in the national spelling bee 67 years ago when he misspelled dulcimer and then fainted.

Shea says he had won second place in the national spelling bee competition when he was 13 years old: "That was 67 years ago." He still remembers the word that tripped him up was dulcimer. "I spelled it with an o instead of a u and then I fainted. My grandchildren make fun of me and tell me that they know how to spell that word.”

Shea's wife Phyllis, who was there to cheer him on, said that last night one of the grandchildren called him and said, "Grandpa, don't faint."

Last year he and his wife returned to watch the national spelling bee at National Harbor. "Only this time it cost me $40." He took along his scrapbook from 1948 and the spelling contestants gathered round to look through it with him. "It was pretty special."

The spelling contest had been advertised as “Declare your independence from spellcheck.” Adrianna Carr, director of Lee's Senior Center presented Shea with a wooden plaque for first place while the other four contestants, sporting light blue Lee Center Bees T-shirts, received a bright pastel piggy bank covered with daisies. "No special significance; what we had on hand given our budget," Carr said. Cathy Jamieson was pulled out of the contestant pool at the last minute to serve as judge when the scheduled judge had a sudden illness. Carr said, "Next year we are hoping to get spelling added to the Senior Olympics." The proposal is due in January.