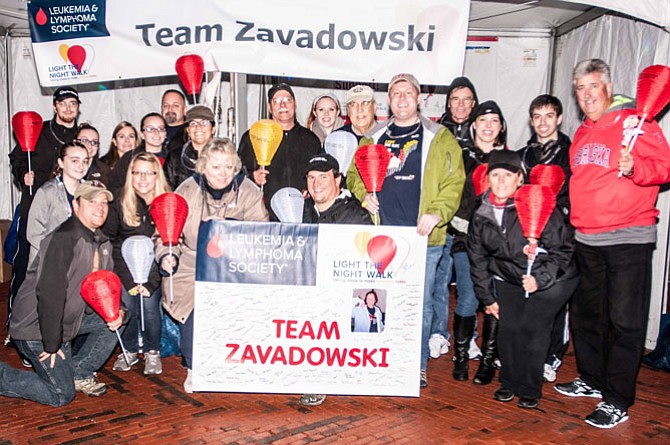 Centreville-based Team Zavadowski at the Light the Night Walk in Reston on Oct. 3. Photos courtesy of Leukemia & Lymphoma Society

Jennifer Keating, of Herndon, who walks the Light the Night Walk, in honor and in memory of her father Tom Bell, the Doo-Wop Cop and an Arlington County Police Officer.

“A nasty one,” said Zavadowski.

His father endured 650 hours of chemotherapy to treat his Stage IV cancer when he participated in a research study at NIH in 2008.

And now, more than seven years later, he’s not only in remission, he’s said to be cured. “He beat all the odds,” said Zavadowski, from Centreville.

“My family has experienced first hand what a cancer study can do to save somebody’s life,” said Zavadowski.

His father’s cancer was so rare, NIH needed years to find enough people to participate in the study that saved his father’s life.

“In order to get to a cure, we need every piece of data,” said Zavadowski.

He has raised more than $140,000 for blood cancer research, including holding an annual charity poker tournament in Bethesda, Md.

“I want to share our survivor story,” said Zavadowski. “The only way to combat this is through research. We feel very blessed that the protocol was happening at that time.”

Light The Night Walks with the Leukemia & Lymphoma Society (LLS) take place in honor of those who battle blood cancers and those who have died.

Walkers are given lanterns to light the night; those supporting a friend, family member or loved one hold a red lantern; survivors hold a white lantern, and those who carry a gold lantern walk in memory of someone who has died.

“You see the gold and you know someone lost somebody,” he said. Last year, “One person hugged my dad, she had lost her husband. There’s a lot of conversation.”

Keating’s father was also known as the Doo-Wop Cop, and served for the Arlington County Police Department for 25 years including as its public information officer.

He also served as McGruff the Crime Dog and spoke to thousands of local youth, always appealing since he also worked as a DJ on WASH-FM. He later was the host of a weekly show on WXTR-FM called, “Smokin’ Oldies.”

“My father was not Catholic, but he went into Paul VI and the kids had their hands in their lap,” said Keating. “He called my mother, and said, ‘Honey, she’s going to Catholic school.’”

Keating, of Herndon, works every year to raise money and awareness for the Leukemia & Lymphoma Society.

“If he never stopped fighting, then I don’t have room to stop fighting,” she said.

Her father’s blood disorder was linked to exposure to agent orange when he was a soldier in Vietnam. But her father was not bitter about it, she said.

“He was a proud patriot,” she said.

“While blood cancers can strike at any time, they can often be overcome,” according to race organizers.

“Light The Night Walk provides inspiration and hope for our patients and their families, honoring survivors and those who are currently undergoing treatment, while remembering those that have lost their battle,” said Beth Gorman, executive director of LLS’s National Capital Area Chapter. “With the support of our walkers, corporate sponsors and media partners we are taking steps to end cancer, and make someday, today.”

The Leukemia & Lymphoma Society (LLS) is the world’s largest voluntary health agency dedicated to blood cancer, and LLS funds lifesaving blood cancer research around the world and provides free information and support services. The LLS mission is to cure leukemia, lymphoma, Hodgkin’s disease and myeloma, and improve the quality of life of patients and their families.

LLS, founded in 1949, has 54 U.S. chapters, and the National Capital Area Chapter is one of the highest revenue-generating chapters in the nation.

Almost 2,700 patients and families are served by the chapter each year.