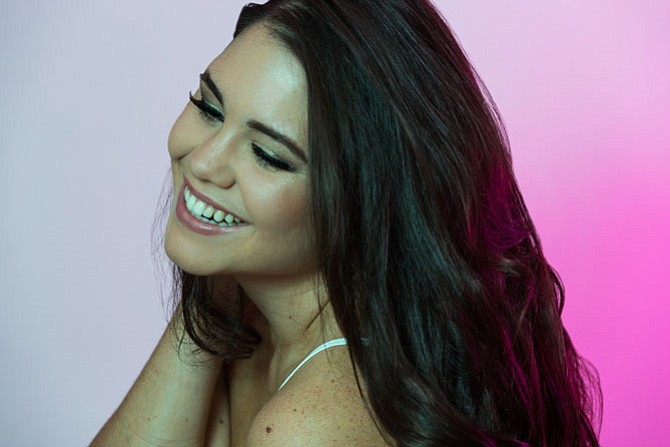 Herndon native and Washington, D.C. resident Elizabeth Dean’s voice has been rocking European radio. She sings on German producer Florian Pauly’s Electronic Dance Music song, “You Got It (featuring Lizzie D),” which was released on SoundCloud, Itunes and Spotify in early August of this year. The song, which is a cover and redo of Roy Orbison’s 1989 hit “You Got It,” is currently playing on major German radio stations and in clubs all over the world.

While Dean hopes this is just the start of her professional music career, she got her start in the halls of Fairfax County’s very own Oakton High School, where she starred in musicals and a cappella concerts.

“I took the musical theater in high school and sang in various groups, including the Fairfax Chorale Society. I also always sang and danced.”

She said she continued musical theater at Christopher Newport University, where she graduated from college in 2012. She said until her once-in-a-lifetime opportunity with Pauly, college was the last time she performed.

“I haven’t really done anything since college except singing in the car, in the shower and just around my apartment,” Dean said. “I guess that’s a good thing, because that’s how my roommate knew that I could sing.”

DEAN’S ROOMMATE was the one who connected her with Pauly, who happened to be looking for a singer for his cover of “You Got It.” Pauly had already worked with sound engineers to arrange the song.

“By chance I met Lizzie in Washington, D.C.,” Pauly, who goes by Florian, said. “Lizzie sang to me and two days later we had a recording. What I love about how it turned out is that both young and old people love the song.”

Dean said this was the first time she had been in a recording studio, and that it was simultaneously a terrifying and dream-like experience. Since Florian was abroad at the time Dean recorded, there was no official plan for how she would execute the song. All she had were lyrics to work with.

“It was really scary for me,” Dean explained. “I had no track, no accompaniment. Once I got in the studio (District Sound Lab in Bethesda), they just built the song around my vocals. I thought it was a bust. I was really disappointed when I left the studio.”

Despite Dean’s assumptions, Florian was pleased with her recording. Two days later, Dean was listening to the first cut of the song.

She did a final recording in Chicago, which she said was “a dream come true.”

“It sounds so cool what they did with it,” Dean said. “I feel so blessed to have had this opportunity.”

Florian’s rendition of “You Got It,” is his second song, and will be released on his debut album. He expects to finish the album within the year, as releasing one song per month is his current plan.

In the meantime, Florian said he will be traveling all over the world, including across the U.S., to promote the song and develop more tracks. So, Dean’s voice may soon be making waves beyond Europe.

THE GERMAN entrepreneur and producer said he absolutely plans to have Dean featured in future tracks. He said he also expects Dean will have opportunities working with other artists and producers.

“Florian has opened a lot of doors for me,” Dean said. “It’s a matter of figuring out how to take the next steps. I want to pursue music, and I like the electronic music scene. I would love to perform live, record more songs and even do a tour.”