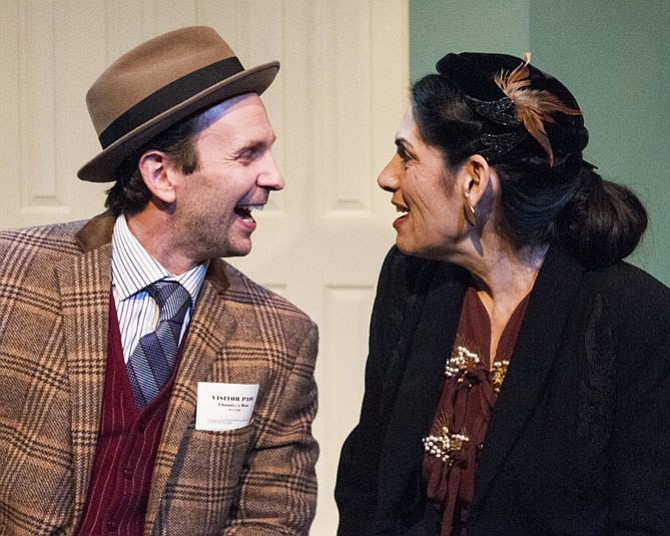 “Harvey” spins around a character named Elwood P. Dowd, who may or may not be a delusional alcoholic. The show probes the notion that being “a perfectly normal human being” might make someone a “stinker.” It rummages into the possibility that a “pooka” (in Irish Folklore, a presence visible only to those who believe) exists in the guise of six-foot tall, “unseen” rabbit named Harvey.

Directed by Michael Chamberlin, “Harvey” has a cornucopia of stellar performances. A supporting ensemble has many laughable moments, making on-stage shambles into blissful entertainment. The supporting cast make the production appealing even with characters that might be viewed as out-of-date given their 1945 origins and viewpoints.

Eccentric to a fault, Dowd is played by Jonathan Lee Taylor. He is a smooth-talking, mild-mannered man, often fueled by thoughts of having a drink. With well-placed special effects, Taylor easily leaves the audience wondering if he might be the sanest person on the stage.

The supporting cast includes a confident, terrific performance by Tonya Beckman as Dodd’s on-stage sister Veta. Beckman has a matchless ability to present a bewildering range of emotions such as exasperation, and vexation without speaking a word. Her work is a bright candy-land of vivid comic energy with her expressive face and physicality.

Sue Schaffel and Emily Morrison provide superb moments of animated slow-burning, daftness reacting to the fraught situations their characters find themselves in. Elliot Bates, a boorish, high-brow doctor, who transforms into an engaging oddball who believes Harvey is quite real.

As tentative love interests, Carolyn Kashner and Tim Torre perform agreeably. Robert Grimm has an over-the-top, burlesque-like turn as a medical orderly. Kelsey Meiklejohn and DeJeanette Horne are solid as foils to the on-stage clowning. With only a few moments on stage, William Aiken hits the mark delivering sobering, wise lines of dialogue.

“Harvey” will bring fun and diversion to anyone ready to let their guard down and be tickled.