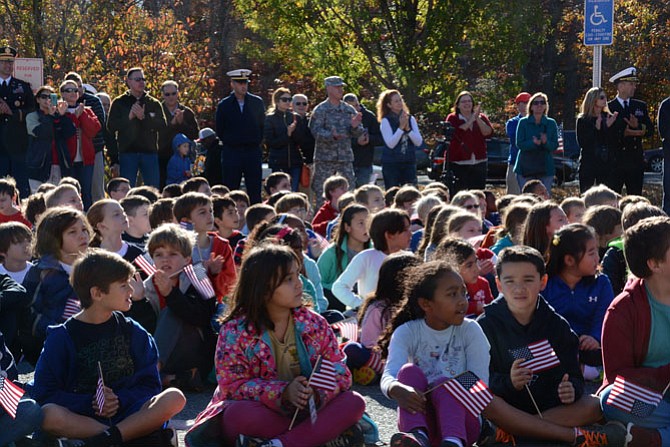 Military and non-military parents joined students at a Veterans Day celebration in front of Sangster Elementary School on Nov. 11. Photo by Tim Peterson.

Springfield resident Tim Swicord’s parents met at West Point, the United States Military Academy, and then both served in the U.S. Army. “They sacrificed,” said Swicord, in sixth grade at Sangster Elementary School. “You could either do it or you couldn’t. They made the decision.”

Swicord said he thinks it’s important for all veterans to be honored for choosing to serve in the military like his parents did. His is one of 155 military families out of 655 total with students attending Sangster.

To honor those parents either actively serving or retired from the military, Sangster hosted an annual Veterans Day program the morning of Nov. 11.

PRINCIPAL Lisa Reddel spoke to students seated facing the front of the school under gleaming fall sunshine: “Veterans are very important to this nation, this community, this school and me personally,” she said. Reddel added that her father and husband’s father both served in the military.

“Freedom is not free,” she concluded. “Freedom comes from a veteran.”

The program included musical performances of “On Veterans Day” and “God Bless America” by the school choir and handbells, and a reading of Ruth Apperton Rous’ poem “I am the Flag.”

After the program concluded, students returned to their classrooms. Each room was scheduled to have a veteran visit and talk about their role in the military.

Commander Robert Lewis, U.S. Navy, planned to visit the classes of his sons Hayden and Connor and talk about some of the things the Navy does. “It’s a great honor to see them in action,” he said. “I hope it leaves a lasting impression not only with them, but their classmates.”

For sixth grade student John Richards, Veterans Day has a special meaning because his father, grandfather and great-grandfather have all served in the U.S. military. “It’s my chance to really learn about what my family did,” said Richards, who added that his great-grandfather served in World War II under Gen. George Patton.

Richards’ family recently moved to northern Virginia from Kentucky because his father took a new post with the U.S. Army. To welcome and support military families that are new to the area, Sangster has a military spouses group to help with the transition.

“We have a different perspective at this school,” said Maria DeHay, president of the spouses group, “having such a big military population. The students live with this every day.”

But whether or not their parents are in the military, DeHay thinks the school’s Veterans Day program and classroom visits are important for all the students.

“It’s a great way for kids and the staff to honor veterans,” she said. “They’re gaining an understanding of what patriotism is, the sacrifices these people make with their lives. It helps them visualize that.”

FOR MORE INFORMATION or to connect with DeHay and the Sangster military spouses group, email msgsangster@gmail.com.