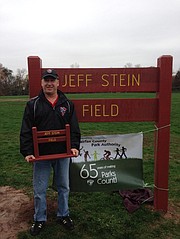 At the same park, Field #6 was named in honor of former Southwestern Youth Association president Gary Flather, who served for more than 20 years.