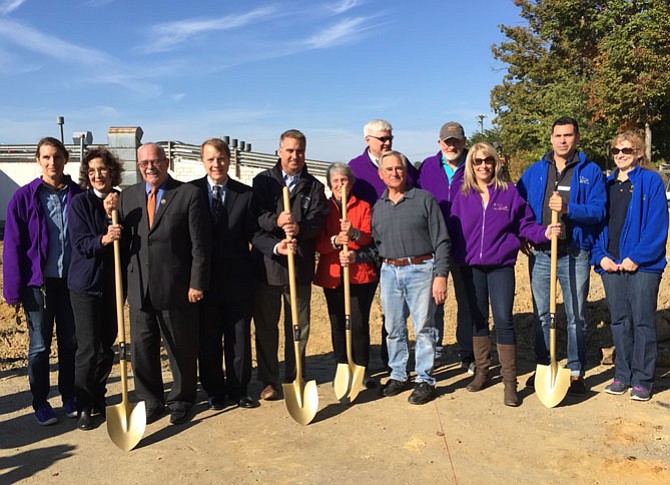 There is nothing like a fresh, new beginning to invigorate the spirit, and that is just what The Lamb Center is getting. On Oct. 20, it broke ground on its future, new home.

Then the Rev. David Bonney of Fairfax United Methodist Church spoke about God’s providence and generosity and led everyone in a blessing and a prayer. Next came Silverthorne, who noted The Lamb Center’s long journey to reach this point and thanked all those involved.

“It’s great to be with the faith-based community today to celebrate the groundbreaking of the new Lamb Center,” he said. “I met early on with the leadership of The Lamb Center, including Mary Petersen and Allen Griffith, and said I was 100 percent committed to helping them find a new location. After a number of years and many disappointments, we finally found a great location inside the City of Fairfax on Campbell Drive.” 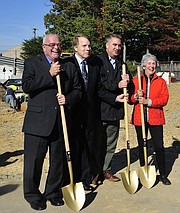 (From left) Gerry Connolly, David Meyer, Scott Silverthorne and Mary Petersen share a laugh prior to the groundbreaking.

“The continuation of the many services the Center provides ensures that the most vulnerable in the community have access to resources to rebuild their lives,” said Silverthorne. “The City Council and I are proud to play a part in turning the dream of a permanent new Lamb Center home into a reality.”

Since 1992, The Lamb Center in Fairfax has served as a place of refuge for the poor and homeless, whom they refer to as guests. It’s a daytime, drop-in shelter providing hot meals, showers and laundry services, plus recovery and employment counseling.

But in spring 2016, The Lamb Center will move from its current rented site on Old Lee Highway to its new home on Campbell Drive. The site is in an industrial area on more than one-third of an acre. And although it’s farther away from retail establishments, it will be close to transportation.

Having a larger, two-story building will enable The Lamb Center to provide more services. It will add a clothing closet and food pantry, as well as office space for its staff. Future plans include offering dental care and a nurse practitioner.

There will be a great room where meals are served, plus rooms for classes and social workers. And the kitchen, laundry and bathrooms will all increase in size. The facility will be open Monday-Friday, 8 a.m.-3 p.m.; and Saturday, 8 a.m.-12:30 p.m., with four full-time staff members and four volunteers there at all times.

At the groundbreaking ceremony, MacPherson explained how The Lamb Center had looked for a new location for years, to no avail. Potential sites at Merrifield, two on neighboring Draper Drive, one near the Massey Building, the Salvation Army building on Ox Road and two other buildings also on Campbell Drive all fell through for various reasons.

“Sometimes it was neighborhood opposition,” he said. “Sometimes it was political opposition. Once, I shook hands on a deal for another property on Campbell Drive and the seller backed out. He took several hundred thousand less from another buyer because he feared we would not get the necessary special use permit.”

THINGS LOOKED BLEAK and, at one point, said MacPherson, “We were running out of options and feared that maybe we had missed out on the ‘last car on the lot.’ But God had a plan for us, all along. God is never late, but He is seldom early. Mayor Silverthorne and the current City Council have been very supportive in a way that might not have been the case two years ago. And The Lamb Center is now in a much better position financially to complete this project.”

Congressman Connolly then told those gathered that “Our faith compels us to take care of our neighbors, and this is the mission of The Lamb Center.” Fittingly, the ceremony ended with everyone singing “Amazing Grace,” led by one of The Lamb Center guests on guitar.