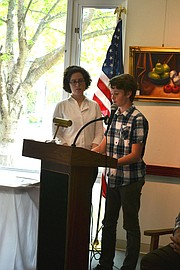 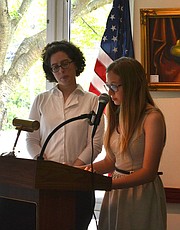 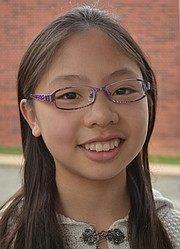 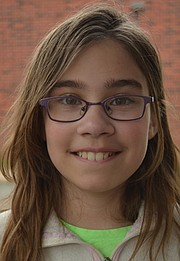 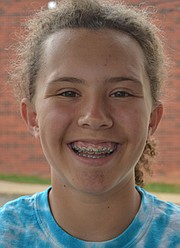 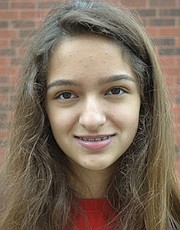 Fairfax County Public Schools approved the contest because the assignment is fairly administered, fits into curriculum, and no outside influence from peers, siblings, or parents can skew results, vocabulary or creativity. Judging was blind as every student was assigned a number to hide their identity.

The event was created by the Great Falls Writer’s Group to encourage, inspire, and reward young writers. “Effective communication is essential to most careers,” said Pat Britz, a children’s author and GFWG member who helped determine two writing prompts from which sixth graders could choose.

One prompt drew from personal experience – “describe two minutes that changed your life or perspective.” The second prompt involved writing a story about an illustration from local children’s author and illustrator, Brenda Kimavitz, of Vienna. The drawing shows two boys reacting very differently than seabirds perched nearby. Students had only 30 minutes to complete the assignment.

Judges said a rubric helped narrow results, but putting a number on originality and creativity was difficult when entries stood out on their own. The judging process took weeks.

“They are all really winners, simply for putting pen to paper,” says Contest Judge Beth Jannery, director of the journalism program at George Mason University. “There was something special and unique and vulnerable in all of their writings.”

Contest Judge L.M. Elliott is a nationally known novelist who writes about young people who lived in historic times. After the contest ceremony, students eagerly talked to Elliott about their works and how to grow their writing.

“What these children wrote in thirty minutes of writing is an accomplishment,” she says, explaining many professional writers have trouble getting that many words on paper in hours.

“The presence of these judges made a huge difference in the outcome of the contest because they are a spark of inspiration to our youth,” said Kristin Clark Taylor, founder of the Great Falls Writer’s Group. “The judges dug deep and really delved into each and every entry with compassion and care.”

“Becoming a great writer takes practice and reading,” says Michelle Miller, president of the Friends of the Great Falls Library, which donated the prize money to winners.

Teachers from other schools have contacted the GFWG in hopes of starting the contest at their school, too.

Before the awards ceremony, a confident sixth-grade Southworth, whose entry is in sonnet form, said, “If I win, I’ll be the first to receive first place in a this contest that will be around for thirty years or more. Yessss!”

Those boys were foolish.

No matter what people said,

Even if what they said could save their lives.

They told the boys about the bay

And the forbidden place

With the lonely pier

They said sharks were there, so stay away.

With fins behind their backs

Later, in the sinking sun

You could see the boys there – just two tiny specks on a lonely pier.

They were kind-of, sorta

Because they turned to the water crimson with their cut, bloody feet.

They came, of course,

The monsters from the deep

Was chasing them with his terrible fist a-shaking

To the heavens themselves.

I hope they will never be so foolish again.

The writer is a sixth-grader at Forestville Elementary.

“Long Shot to the Moon” - By Caroline Wenks

CRACK! The ball hit the bat with a sickening smack. As the baseball flew over the pitcher’s head, the shortstop tried to catch it, but it soared over his head as well. He groaned audibly.

“Not fair!” shouted the Giants’ coach.

“Well, if Jayson Werth actually hit it as he did, then it counts,” responded Nationals Manager Matt Williams.

The Giants coach stomped off angrily.

This is where I came in. Jumping up, the leathery texture of the home-run ball smacked my sweaty palm. My brother next to me congratulated me and stormed away. He is a die-hard Giants fan. Me? I’m the biggest Nats fan!

As I buckled up in the backseat of the Volvo, our car, my favorite moment came to mind. The blurry ball rushed past the faces to my left. Reaching out my right hand and jumping up, I caught the ball.

Coming back to reality, I put the ball up next to the window, making it look like the moon. Oh, no. Not the moon. No! No! I snapped back into my seat and shut my eyes. Here comes the vision again.

I was playing catch with my brother on the dock behind our house. A pigeon squawked -- then another and another. More and more joined in as I stared, transfixed at them. I glanced back over to my brother and followed his line of sight. The moon! The moon was hurtling toward us. Time seemed to freeze. My feet were glued to the wooden panels of the dock. I couldn’t shift my gaze. I had to move or I would die.

BOOooommMM! CRACKLE! SNAP! The moon froze. Then it shriveled up like it was a balloon and somebody just let out all of the air. RUMBLE! BANG! The moon fell. It plopped into the water. NO splash.

This is the moment that changed my life. Before, I saw almost everything negatively. That dream made me realize that I should be thankful – and glad to be alive.

The writer is a sixth-grader at Forestville Elementary.