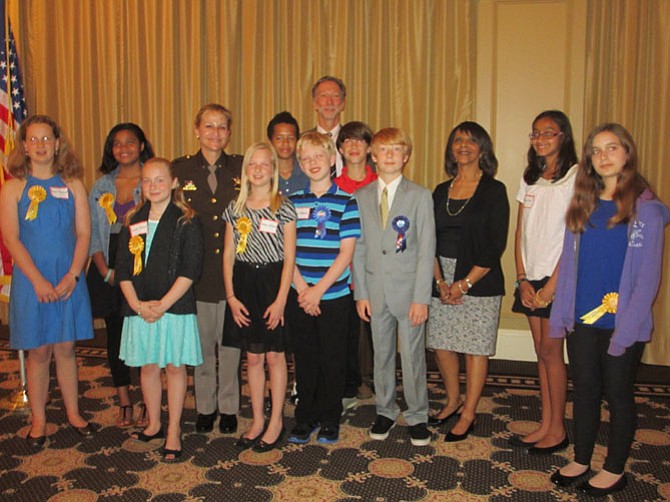 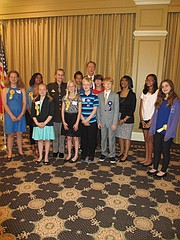 It is not often that elementary school students are recognized for outstanding contributions to school and community at an evening banquet in their honor. But, on May 6, the Optimist Club of Greater Vienna did just that, presenting plaques to honorees at the 19th Annual Helping Hands Awards ceremony. Sixth-graders from the area’s 11 elementary schools were selected by their respective schools’ educators and singled out for volunteerism within their school and community outreach, from playing Santa to raise money for charity to collecting blankets for international delivery. Fairfax County Sheriff Stacey Kincaid spoke on the value of volunteering and handed out the plaques to each student. The schools were each presented with a check for $200, as well.

Pat Hackerson, Helping Hands Coordinator, called the award recipients students who do “extraordinary things in their community and their schools.” 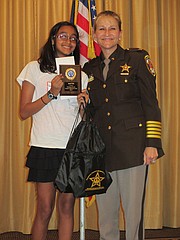 KINCAID BROUGHT “loot bags,” emblazoned with the sheriff’s department logo, for the award recipients and their siblings. Parents, siblings, and representative educators attended in support of their students.

In 1997, the Optimist Club of Greater Vienna was moved to honor sixth grade students whose actions on behalf of their class, school, or community, embody the tenet of Optimist International — “giving of one’s self in service of others will advance the well-being of humankind, community life, and the world.” Since then, this award has been picked up by Optimist clubs throughout the country. The idea was conceived by the selfless actions of a sixth-grader.

The Optimists are an international service organization dedicated to serving the needs of children around the world. The Optimist Club of Greater Vienna supports Growing Hope [support and resources for the families of children undergoing cancer treatment, the local Bland Music Competition, the all-night graduation parties for the three high schools in the Vienna-Oakton area, sponsors competitions for local students, and maintains the red caboose along the W & O D path off Church Street, as well as operating the Vienna Farmers’ Market. The club’s primary fundraiser is Christmas tree sales in Vienna, located on Maple Avenue in the Giant Food parking lot. To learn more about the Vienna Optimists or to join, go to www.optimistclubofgreatervienna.org/.