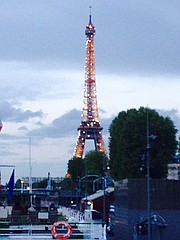 A view from the ship at the Eiffel Tower.

We now know for certain that spring is here and summer is not far behind. How so? Because the Reston Farmers Market opened for its 18th season on Saturday. The weather gods smiled on opening day once again and the turnout was huge—perhaps the largest ever. It was a grand rite of spring with an air of celebration and vendors selling more than they expected on a terrific opening day. Having just returned from a trip to France with old friends, we were ready for the big day.

Our travel took us first to Paris to see the typical tourist sites of this beautiful city with its wide boulevards, Arc de Triomphe, the Basilica of the Sacred Heart of Montmartre, the Eiffel Tower and more. Then we cruised down the River Seine to Normandy, stopping along the way in the town of Vernon (pronounced vair-noh) and the charming village of Giverny, the home of Monet with the idyllic gardens portrayed in many of his paintings. Nearby was a small, primitive church which I found more interesting than some of the grand cathedrals. The church sat on a hillside with a graveyard up behind it. A particularly interesting monument included a huge propeller blade from a British Lancaster bomber sticking up out of the ground. It had crashed on that site after a raid on Nazi installations nearby late in WWII. The monument honored the seven British crewmen killed in the crash.

Farther down the river, as we neared the English Channel, we left the boat and took a bus to the beaches of Normandy, site of the June 6, 1944 D-Day landings. My father served in the infantry in WWII. He was not part of the D-Day landings but did fight at the Battle of the Bulge months later. I had never visited the area and was not prepared for the impression of awe it left me with. We drove southward along the beaches of Sword, Juno, Gold, Omaha, and Utah. The landing zones went on for miles—where tens of thousands of American, British, Canadian and other allied troops were greeted by German mines, artillery and fierce gunfire. Despite extensive preparation and a huge force, winning the beachheads proved to be a monstrous and deadly fight. The weather was foul, the seas heavy—so much so that the Americans at Omaha Beach lost 27 of 29 tanks they attempted to land with the aid of flotation devices which failed in the huge swells. Many of the thousands of young GIs drowned as they jumped from their landing craft into deep water with heavy packs and equipment trying to avoid the withering German gunfire. Thousands of others were killed by mines and the relentless gunfire. The fighting went on for hours and into the night at the five landing zones before the beachheads were secured.

Before returning to our boat, we stopped at a couple of the massive German bunkers with their ghostly rusted artillery pieces still facing the beaches. We went on to the main American cemetery a short distance from Omaha and Utah beaches. There we saw 9,400 gleaming, white marble crosses and stars of David marking the final resting places of those who gave their lives. Taps was played during a brief ceremony in tribute to those buried there. There wasn’t a dry eye in our entire tour group. Note: Next of kin were given the option of having remains of loved ones repatriated to the U.S. Nearly half did so. On the way back to Paris, we stopped at the richly ornate, massive Palace of Versailles, the French showpiece built by Louis XIV. Impressive, but it could not compare to what we had seen at the beaches of Normandy.