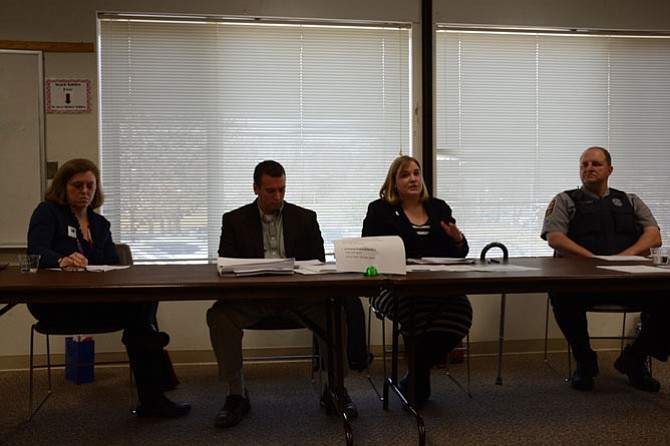 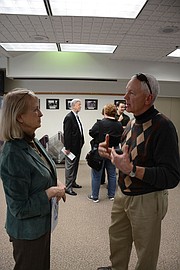 Among intimate partner homicides in Fairfax County in 2009 and 2010, firearms were the fatal weapon 60 percent of the time, nearly double the next closest implement: knives. Fairfax County domestic violence coordinator Sandra Bromley shared this and further information at an information forum on gun use in domestic violence and suicide held at Pohick Library on March 22.

Having firearms in the house, Bromley’s presentation continued, raises the chances of lethal to non-lethal violence taking place by 6.1 to 1.

Bromley also highlighted a distinction between federal and state law regarding limiting domestic violence offenders’ access to firearms, primarily whether misdemeanor criminals or people qualified for a protective order can posses, ship, transport or receive any firearm or ammunition.

THE FORUM was moderated by Kristin A. Goss, associate professor of public policy and political science at Duke University and author of “Disarmed: The Missing Movement for Gun Control in America” and “The Gun Debate: What Everyone Needs to Know” (with Philip J. Cook).

“This public forum grew organically out of the study that we conducted on the progress that Fairfax County has made in serving people at risk from domestic violence or suicide,” said League of Women Voters member Sidney Johnson, who was on the committee that helped organize the forum.

“We felt that the public needs to know that law enforcement and the mental health and social service agencies are working to become more efficient and effective in coordinating their responses and educating the public,” Johnson continued.

One of those partnerships is between the Fairfax County Office for Women & Domestic and Sexual Violence Services and Police Department, which Bromley explained worked together on a Lethality Assessment Protocol to screen for high-danger victims of domestic violence and help refer them to services.

A main theme of all the speakers was encouraging the citizens in attendance to spread the information shared that afternoon and encourage others to educate themselves.

An average of 47 percent of homicides in 2009 and 2010 involved homicides -- people who know about threats of violence to someone in a relationship but decided not to intervene -- according to Bromley’s presentation.

“You can become our community bystanders,” Bromley said. “Tell them you’re concerned for their safety.”

Opening up communication was also a marching order from Jesse Ellis, who spoke to the deadly connection between mental illness, access to the means to kill oneself and people simply avoiding having a direct dialogue with someone who may be exhibiting risk factors.

“How do we reduce the stigma around them?” said Ellis. “Thirty percent of youth in Fairfax County have been identified as having depression symptoms,” cutting across demographics and economic levels. Though he also explained on average, actual suicide rates for ages 10 to 19 fall below those for people 20 to 24 and the highest group, 60 and over.

Regardless of age, Ellis said, “A big piece of this is talking about it.”

Frey stressed the four cardinal rules of gun safety that he was drilled on when he joined the police department 27 years ago: Always assume a gun is loaded, don’t aim at anything you’re not prepared to kill, don’t keep your finger on the trigger until you’re ready to fire and know your target and what’s around it.

He also expressed the importance of being a responsible gun owner, knowing the cardinal rules and being a responsible parent when it comes to educating children on firearm safety and following up for more information if they spend time at a home with firearms in it.

“If we can get some kids talking about it,” Frey said, “that can go the whole way up into adulthood.”

South Run Oaks resident George Korte attended the meeting for more information on legislation that might affect him as a gun owner.

“I support the objectives announced today,” he said, “But I’m disappointed there was no literature on the proposed wording in the law. How would it be enforced?”

Del. Vivian Watts (D-39), who sits on the Virginia General Assembly Criminal Law subcommittee, said she came to the forum to get an overview on procedures and protocols for dealing with gun-related and domestic violence. “We’ve come a long way on treating domestic violence,” she said, and highlighted the “importance of getting out” information on responsible gun ownership.