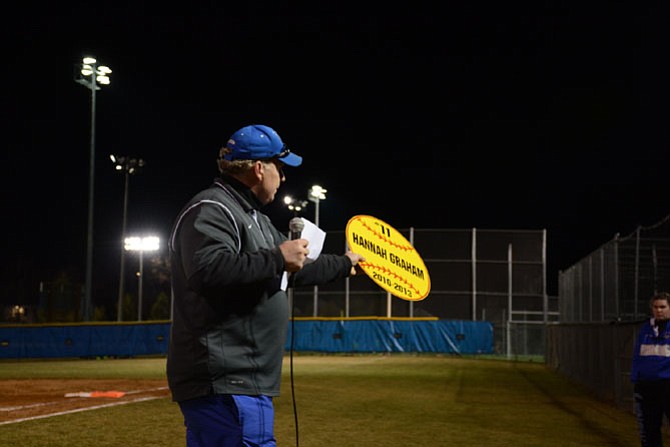 After a late scare, the Wolverines held on to defeat the local rival Mount Vernon Majors 6-4 on March 18. The chilly air gave little indication the first day of spring was just 48 hours away.

After the final out in the top of the seventh inning, West Potomac head coach Craig Maniglia lined both teams up along the first base line, facing heavily layered parents and siblings occupying the home bleachers. Among them was Susan Graham, mother of Hannah, who died last fall after she went missing from the University of Virginia Campus.

Jesse Matthew, the man charged with Graham’s abduction and murder, will have a trial date set at a May 5 hearing in Albemarle County.

Graham was a sophomore at the time. She graduated from West Potomac and played four years of softball for the Wolverines, earning a starting position on the varsity squad in left outfield as a senior. She was also named a team captain.

“She was a dedicated player and an exemplary teammate,” Maniglia said, trying to hold a strong speaking tone while his hand gripped the script tightly.

Maniglia announced that the team was dedicating their season to Hannah, as well as wearing her initials on their helmets, flying a banner with her number on the right field fence and hanging a softball-shaped plaque with her name permanently on the press box. Her jersey, #11, will be retired for at least this season.

The fence looking over right field at the West Potomac softball park honors Hannah Graham prominently, along with softball placards for other Wolverine alumni.

Another softball will be hung for Renee Sheldon, a former player who died in a car accident on graduation night in 2007.

“It’s supposed to be motivating for the personal level,” Maniglia said after the presentation, “for them to think about their relationship with her and draw from within. I want them to look up at the fence and say: You and I.”

Maniglia, who’s been head coach of the program for the last five years and otherwise involved for 17 years, said forming lasting relationships is as important as competing in the sport.

As the West Potomac and Mount Vernon players hugged, cried and lived the moment, a few smiles proved this was also a celebration of what Hannah gave to the program, to her peers.

“Here’s to Hannah: a friend, a teammate and a kid with a big-hearted smile for everyone she knew,” Maniglia said in his speech. “May the light always shine brightest right here for you.”