At Centreville High’s recent Science Fair, students displayed their projects in the school cafeteria for judging; below are details about a few of them.

Junior Richard Perez investigating how to obtain the greatest amount of solar power. “I wanted to find the position, or angle from the ground, for a small solar panel to get the most sunlight,” he said. “I set it outside at 30, 60 and 90 degrees at 3:30 p.m. and recorded the amount of electricity it received in voltage. I determined that 60 degrees was the best angle to use for solar energy because it caught the sun directly and gave off the most sunlight.”

Freshmen Krista Wink and Jalina Montoya examined environmental energy efficiency. “We were trying to prove which energy source would be best for our environment,” said Montoya. “We tested, wind, solar and hydroelectric power.”

Wink said solar energy worked best in their experiment. “But in real life, hydroelectric works best, and then come wind and solar energy,” she said. “Hydroelectric power transfers a higher percentage of its energy than the other sources do.”

Sophomore Marissa Lawrence and junior Jessica Mabanglo called their project, “It Sounded Better in My Head.” That’s because, sometimes, we hear more sound from one headphone than another, and we wanted to know why,” said Lawrence.

“So we used microphones and speakers to mimic how human ears hear,” added Mabanglo.

Lawrence said people are able to hear “depth, elevation, loudness, movement over time, location and direction” of sound. So, said Mabanglo, “We recorded different sounds happening around us and played them back.”

They then compared 2D (dimension), 3D and 4D sound and discovered that they had too many variables in their experiment. Said Lawrence: “We found out that, no matter how advanced technology gets, it can’t work as well as the human brain can to interpret the noise to the ears.” 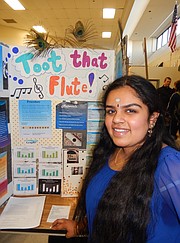 A flute player for almost 11 years, sophomore Megha Kalyan fittingly called her science project, “Toot that Flute.” She decided to use different materials to create a flute so she could see if a material other than bamboo — which is used in the Eastern Hemisphere — could be used to make good-sounding flutes.

“I used bamboo as the control, and then red wood, green wood, plastic and ceramic and made the flutes,” she said. “But bamboo had the best tone and pitch.” 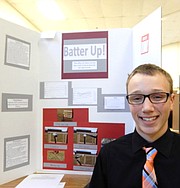 Basball player David Campbell, a freshman, did a baseball-themed project. Naming it “Batter Up,” he looked at the effect of where on the bat a ball is hit on how far the ball travels.

“To swing a wooden bat consistently, I built a machine out of two-by-fours, nails and clamps to secure it,” he said. “And I used a spring to make the bat swing forward. I set up the tee so the bat would strike the ball at 1-inch increments, and I did it 10 times.”

Examining the effect of vitamin D on plant growth were (from left) Peter Varghese, Ryan Schneider and Ishmail Nabie.

“We figured, if we gave a moong plant more vitamin tablets, it would grow more,” said Schneider. “But the tablets overpowered the water and didn’t allow the plant to gain the nutrients.”

Varghese said gardeners and farmers use these plants. “We gave the plants different amounts of vitamins each day,” he said. “We crushed up the tablets.”

“And we put two tablespoons of water into each one,” added Nabie.

So what was their conclusion? Said Varghese: “Even though more wasn’t better, we learned that, ideally, it takes one vitamin D supplement per day for the plant to grow well.”