Arlington Boy Gets to Skate with Braden Holtby
Votes

Arlington Boy Gets to Skate with Braden Holtby 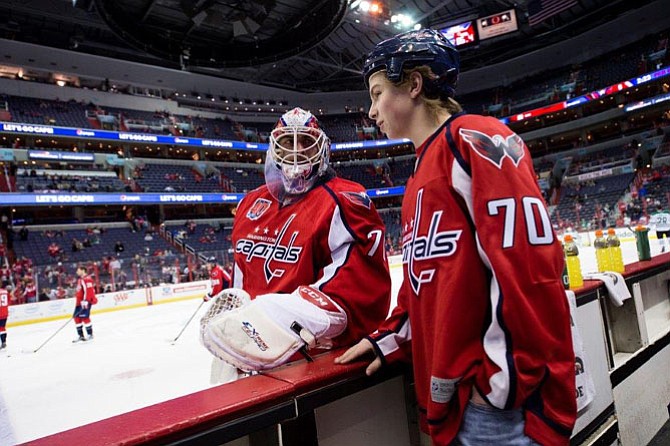 Washington Capitals goaltender Braden Holtby greets 13-year-old Healy, Alaska, native Caleb Graham as Graham watches warmups from the Capitals’ bench prior to the team’s March 13 game against the Dallas Stars at Verizon Center in Washington, D.C. Graham suffers from a life-threatening heart condition and had his wish to meet Holtby granted by Make-A-Wish. Photo Contributed

In addition, Graham and his family also attended the Capitals home game against the Dallas Stars on March 13 at Verizon Center.

Graham has a life-threatening heart condition that has required him to undergo a number of surgeries over the past 13 years and receive a pacemaker. None of this has stopped him from living a full and active life.

The Healy, Alaska, native has been playing hockey since the age of five, joining his older and younger brothers. He has been holding down the position of goaltender for the last two years, skating with the Alaskan Bantam team, the Healy Coal Kings.

On March 12, Holtby met with Graham for breakfast at Kettler. Graham then skated with Holtby following the conclusion of practice. He also received a tour of the Capitals locker room and was presented with a custom jersey.

For more information about the Make-A-Wish organization, visit www.midatlantic.wish.org.