Connolly's ‘Holiest Day of the Year’ 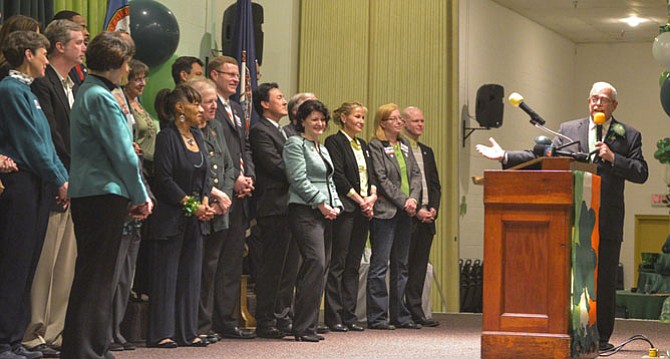 For 20 years Gerry Connolly has hosted an annual St. Patrick’s Day event. What started in his home has now become one of the biggest fundraising events in Northern Virginia.

As John Wittman from Fairfax Station said, “Throw in some great Irish fare and I’m there!” 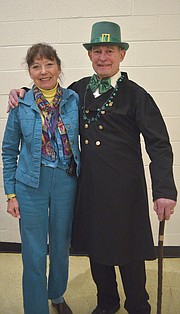 Beverly Dickerson and John Eagan of Oakton showed off their Irish garb and walking stick.

Volunteers helped serve food and beverages to over 1,100 elected officials, candidates and party faithful with traditional Irish fare of corned beef and cabbage, potatoes and salmon. Throw in cups of Harp beer and the mood was festive across the Kena Temple ballroom.

Lt. Governor Ralph Northam, Congressman Don Beyer, Sharon Bulova, chairman of the Fairfax County Board of Supervisors, and dozens of state and local officeholders from across Northern Virginia joined Connolly on stage. In his remarks, Connolly recognized the array of elected officials and candidates and said they represented the strength of Democratic principles and values in the region. “I am proud of our values to offer opportunity to everyone. Let talent be the ceiling, not your gender, color of your skin, or sexual orientation”, said Rep. Connolly.

Dozens of volunteers planned the annual event, decorated the ballroom, and prepared and served. Some volunteers and attendees have participated in all 21 of Connolly's St. Patrick Day's events, held on what he jokingly calls his "holiest day of the year."