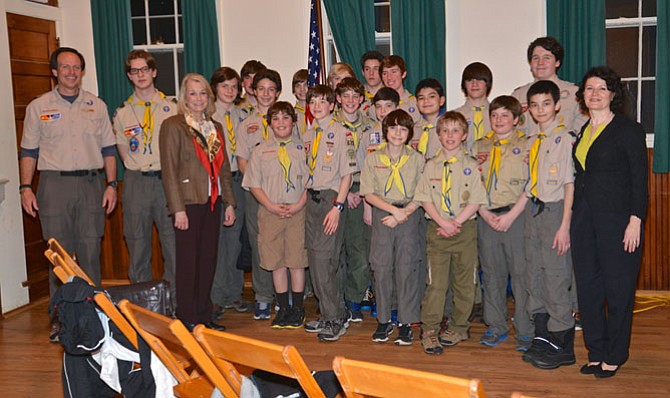 Members of Great Falls Boy Scouts Troop 673 were invited to attend the meeting. The scouts need to interact with an elected official in order to advance in their scout ranks. They pose here with their Troop Master, Glenn Prickett on the far right, and Del. Murphy, left front and state Sen. Barbara Favola, far right front. Photo by Andrea Worker.

The monthly Great Falls Citizens Association (GFCA) meeting offered several special guests on the agenda for the March program, both as speakers and as attendees. Nearly one side of the meeting hall was taken up by Great Falls Boy Scout Troop 673. Scout Master Glenn Prickett explained the scouts’ presence at the school night event. “In order for the scout to reach first class rank, he must meet with an elected official. It’s important that our youth learn the value of participating in our government process,” said Prickett. “We were thrilled to be invited and have this chance to meet our local representatives.”

State Sen. Barbara Favola (D-31) and Del. Kathleen Murphy (D-34) were the distinguished speakers at the March meeting of the Great Falls Citizens Association. The elected officials were asked to speak to the question “What’s going on in Richmond” as the latest legislative session has just concluded.

Prickett was referring to Virginia State Senator Barbara Favola (D-31) and Del. Kathleen Murphy (D-34). The two state legislators were on hand to tell their constituents about the successes – and disappointments – of the most recent session that ended last week.

“The good news,” Favola told the assembly, “is that I believe this year there was much less partisanship than in years past. There was some real communication between members on both sides of the aisle.”

AMONG THE SUCCESSES that Favola announced were the securing of major funding for mental health issues for youth. “I’m sure you all remember the tragedy when (Virginia) Sen. Creigh Deeds was attacked by his mentally ill son, who then killed himself. Sen. Deeds found very little help from the system when trying to help his son. We want to do everything we can to prevent further such tragedies.”

Favola also reported on bills that address sexual assaults on college campuses, that offer assistance to foster youth in furthering their educations, and that require homecare providers and hospices to report disciplinary action against staff members to the state’s Department of Health. Before the passage of this bill, there was no requirement that these providers tell anyone of wrongdoings by staff members who interact with patients. An ethics bill was also passed that included the establishment of an Ethics Council in the Legislature. “It’s not perfect,” acknowledged Favola. “It was passed in the eleventh hour. We will have to go back to that one, but it’s a start and gives senators and delegates a place to discuss things before there is a problem.”

Among the disappointments in Favola’s view were the failure to pass any type of gun safety legislation and the failure to move forward on Medicaid expansion in the state, leaving money that Virginians have already paid on the table, rather than being put to use to insure more citizens or improve health services.

Del. Murphy, just recently elected to the Virginia House of Delegates in January, was equally disappointed that gun safety bills failed to pass in this session. “We couldn’t even get some of these to a hearing. That has to change,” declared Murphy. The bill that Murphy supported was designed to keep guns away from persons with repeat convictions for domestic violence. “We were even willing to compromise and prohibit gun ownership for this group for just one year. Even that couldn’t get through, when it is widely understood that when guns are available to persons who have committed such violence, then those guns will often be used against the victim.”

After each elected official spoke, the floor was open to questions – and the Boy Scouts jumped right in. There were several questions about gun ownership and the potential threat to the Second Amendment. “We are not talking about what many see as gun control, interfering with a law-abiding citizen’s right to bear arms,” she explained. “But people who commit violence, repeatedly, against others should not have the same right to own guns. That’s common sense, not gun control.”

Gun laws, transportation issues and education continued to be the main subject of the questions posed, both from the scouts and the adult citizenry. Favola took some time to briefly outline the recent history and the process of project development since the 2013 passage of the transportation funding bill. She also agreed with several comments about the difficulty that Virginia students have in getting into Virginia colleges, versus students from out of state. “We need more funding and support for our state institutions,” she said. “We are creating a brain drain in Virginia. Students who go out of state for school frequently don’t return after graduation. We need those educated young people with strong ties to our communities.”

BEFORE THE GUESTS DEPARTED and the usual business of the association was taken up, GFCA board member Phil Pifer treated the audience to two compositions in contention for the state song of Virginia. “We haven’t had one since they retired ‘Carry Me Back to ole Virginny’ in 1997,” he said. After listening to each and viewing a slideshow that provided the lyrics for both “Our Great Virginia,” and “Virginia, the Home of My Heart,” Pifer called for a straw poll, asking that the gathering choose their favorite. “Virginia, the Home of My Heart,” was the hands down winner.

More about GFCA can be learned from their newly updated website at www.gfca.org.