Arlington: On the Frontlines Against Homelessness, Part One
Votes

Arlington: On the Frontlines Against Homelessness, Part One

A-Span is one of several organizations active in county. 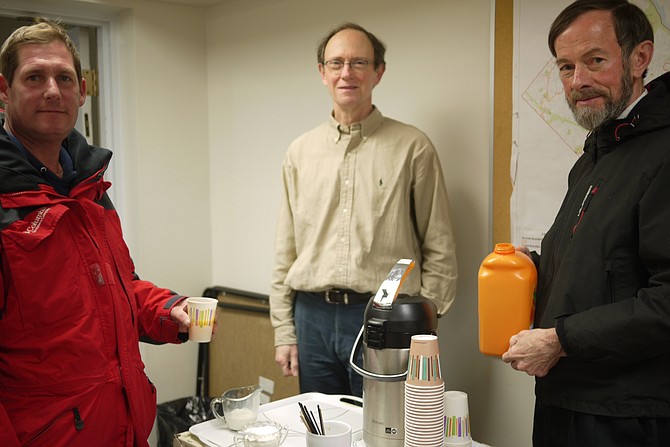 By Eden Brown/ The Connection

At the offices of A-Span, on South Nelson Street, perched over the Arlington Food Assistance Cooperative (AFAC), Ayana Bellamy and David Ordonez talk about their passion: reaching out to the homeless and getting them into housing. Bellamy is a 32 year old from Northern California with a B.A. in psychology. She moved to D.C. for the reason a lot of people move to the area: to live where government happens. She worked at GreenDoor for a while, but the housing solutions in D.C. are minimal and the work is frustrating when you can’t get homes set up.

She came to A-Span couple of years ago and found the housing options made a difference. “I never get up in the morning and dread going to work,” she said. “I love doing this. Even when a client resists help, I know if I can just keep working on it, eventually I will get somewhere.” One of those was James C., a homeless man who lived in the Rosslyn Metro for 15 years. He was a leader of sorts for the homeless in the Metro: he would welcome newcomers and make sure no one got hurt. James told his story to Bellamy once he felt comfortable with her. He became homeless when his girlfriend in the District died. “No,” he said. “I can’t come in. I have a police record. I don’t have credit. I’ve been in jail.” But Bellamy got him in, got him housed, put him on his feet.

Ordonez took a different path to A-Span. He ran his own construction company in Annandale, but when the business took a turn downward, he needed a job. He knew he was good with people, and a friend recommended working in a shelter in Alexandria. Eventually he moved to the Winter Shelter, and to A-Span, and now, seven years later, he says he has a huge sense of accomplishment. He and Bellamy and the other outreach workers talk a lot, share stories, trade clients. “We use very different tactics”, he said. “What works for one guy, doesn’t work for the next. Sometimes they will respond better to me, sometimes to Ayana.”

They work to build rapport with the people on the street, sometimes just waving, sometimes offering food. ‘We plant the seed, develop rapport, hand out guides, don’t threaten,” said Bellamy. You can do this every day for 10 years for a very difficult case, and the guy won’t come in and get help until the 11th year. But when he does, and you can house him, it is very exciting.”

Not all the homeless and panhandlers like being approached, according to Ordonez. Three out of seven can be abusive when approached, he cautioned, the night he led the Point in Time Count. Outreach workers like Ordonez and Bellamy know all the street people by name or location. When asked about the woman in a wheelchair near Glebe Road and Lee Highway, they respond almost in unison: “There are four wheelchair panhandlers in Arlington. They are all lodged, and they all receive a disability payment. They want the extra money to maintain the lifestyle they want.”

Bellamy remembers one woman who was panhandling and appeared to be 7 months pregnant. The case workers were concerned and approached her to help. She had a pillow under her coat. Arlington has a zero tolerance policy for people who beg on the street with children: there are three Roma women who come over to Arlington with babies at the breast and panhandle. They are at risk for being arrested for endangering the lives of children. “Arlington made children a focus years ago”, according to Kathy Sibert, A-Span president and CEO. “There are a few homeless children in the schools, but Arlington County makes sure they have a place to shelter. You won’t find Arlington homeless kids living in a car or under a bridge.”

Think it is expensive for Arlington County to house the homeless? Yes, but it is more than twice as expensive to have homeless people on the street, according to Sibert. It costs about $45,000 a year to manage homeless issues for one person, whereas it is only $22,000 a year to put homeless into homes. The $45,000 adds up: one night in jail costs taxpayers $179, emergency room bills cost thousands. Calls to the police when a homeless person is urinating on the street cost money, and it happens a lot. But getting homeless into housing has an immediate effect, said Sibert. “They stabilize. They have a case worker guiding them, working up a budget, getting to meetings, finding work. “

One of the issues for A-Span is that panhandlers take attention away from the chronically homeless and the temporarily homeless, each a separate category. Michael W., who did not want to give his full name, is in the latter category. He came to St. George’s Church on a wintry Wednesday evening to pick up a sandwich and hot soup. He didn’t look homeless. He had a neat haircut and shave, an alert and interested face, jeans and work boots. He said he was hoping for housing soon, was a veteran and was working, getting up at 4 a.m. to stand in line with other day laborers who earn $10 an hour on a good day. He sleeps in the shelter, particularly in wintry weather. He said he’s grateful to A-Span and volunteers, wishes the wheels would turn faster, but is hoping to see housing soon. Not all the people at St. George’s are homeless. Some are just men who can’t make ends meet on their disability pensions. Jesse W. was laid off from the Coca Cola Bottling Plant and finds it hard to live on his income. He comes for a sandwich and the company.

St. George’s is an example of the partnerships A-Span counts on to stretch funds and reach out to people who are having financial trouble. A-Span used to serve its bagged meals outside the church in the parking lot: then a few years ago the church invited them in. They have allowed A-Span to bring in a pro bono doctor as well as provide outreach services. Clients can come in from 5:30-6:30 p.m. during the week to speak with A-Span staff as well as get a meal, medical services, clothes, shower vouchers, and the company of other men and women.

A-Span also has partnerships with Central United Methodist Church located at 4201 Fairfax Drive. A-SPAN staff is there on Fridays from 8 a.m.-12 p.m. and clients can come in for a hot breakfast as well as case management and outreach services. They average around 100 people every Monday morning. A-Span works with Arlington Temple United Methodist Church located in Rosslyn on Nash Street above the gas station. There is a case manager there who focuses primarily on the homeless in Rosslyn.

A-Span is the only organization in Arlington which goes out on the street and talks to street people in an outreach program, according to Sibert. Outreach workers see their “clients” once every three days, even if it is to approach them with a bottle of water. It is a fairly common misconception that the homeless are either hopeless cases, or they prefer life on the streets to a more disciplined life as a homeowner. Arlington County’s record in doing just that: bringing in homeless people to shelter, rehabilitation, and homes, is proof that the homeless can be helped, want to be helped, and will be helped if we direct our funds to that effort.

What is Continuum of Care?

Arlington County has a core network of interconnected programs and services (called Continuum of Care, or CoC) to assist people who are homeless or at risk of becoming homeless. The CoC includes county government programs/services and non-profit organizations. It provides a foundation for the broader community partnership working toward the shared goals of preventing homelessness before it occurs and returning homeless individuals and families to stable housing as quickly as possible. It includes:

According to Kurt Larrick, director of communications for the Department of Human Services for Arlington County: