Police continue investigating wave of gunfire reports from across city. 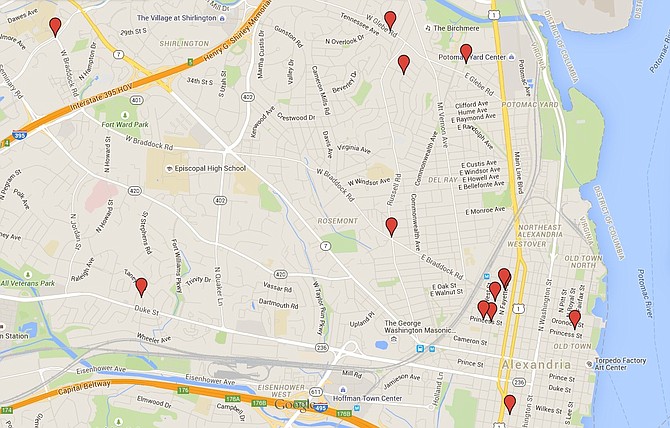 Alexandria — The first “shots fired” call of the summer came in on April 18. Since then, there have been 13 reports of “shots fired” across Alexandria. The situation attracted enough public attention that, on June 17, the Alexandria Police Department released a statement identifying the calls as a priority for the department. But while the situation remains under investigation, Alexandria Police say the answer is likely far less nefarious than it may seem.

“For the last two calls we’ve received, there was no corroborating evidence that a shooting did occur,” said Police Public Information Officer Crystal Nosal. “It’s a report of shots fired, which is very different from knowing that someone was shooting a gun.”

According to Nosal, the amount of calls is not usual for the Alexandria Police Department, but the department’s new notification system makes those calls more visible.

“With the recently added notification system we’ve been doing, if we get any calls we put a statement out,” said Nosal. “That’s something the public is having to adjust to … we’ve been putting out a lot more information on the shots fired.”

However, the increased visibility does not account for all of the shots fired instances. In the public statement, the police identified the area between the Braddock Road Metro area, Cameron Street, and Washington Street as the center of the disturbances.

“Detectives continue to investigate the individuals identified as involved, and have also seized firearms and collected a number of pieces of physical evidence,” said the police in a statement. “We are actively … making progress in identifying the individuals or groups responsible. Several arrests have been made.”

At least one of the calls was related to another criminal incident. The shots at Beauregard and West Braddock were investigated in conjunction with a robbery on the street. According to Nosal, the victim of the theft reported that shots were fired into the air by the robber. While she had no comparative numbers available, Nosal said crimes of this nature are more common in summer months.

“There’s usually more outdoor related crime because people are outside more,” said Nosal. “Just like we get more robberies and package thefts around Christmas, outdoor crime does pick up when the weather is nicer.”

However, Nosal indicated that a deeper problem could be taking root.

“In some cases, these incidents are linked to certain crowds of people,” said Nosal. “If it is two groups of people going back and forth, neither the victims nor the aggressors are calling the police to report that. We have made arrests and taken weapons off the street, but we need people that are willing to come forward and say what happened.”

Nosal noted that the Alexandria Police Department was not saying there was a gang war being waged in the Braddock Road Metro Area.

“We’re not talking gang activity,” said Nosal. “To be termed gang activity, there must be clear gang identifiers, and that is not happening in this case …. It’s not an old school family rivalry either, but people hang out in groups, and when they get into arguments they tend to stick up for their associates.”

But while the police investigate the series of robberies and not-gang related violence, many of the shots fired calls still end up as false alarms.

“After witnesses interviewed,” said the report from North Fayette and Wythe streets, “it is most probable that they heard fireworks.”