Alexandria: ‘For God and Country’
Votes

Alexandria: ‘For God and Country’ 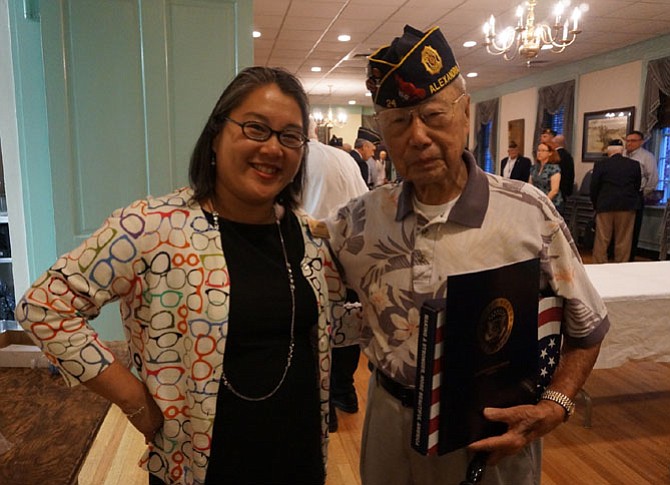 World War II veteran Col. Kim Ching (USAF, ret.) with Anh Phan, who presented Ching with a flag flown over the U.S. Capitol on behalf of Sen. Mark Warner. Ching, a past commander of American Legion Post 24, celebrated his 90th birthday May 25. Photo by Jeanne Theismann.

Newly elected officers of American Legion Post 24 are sworn in by past national commander Dan Dellinger during the installation ceremony June 10 at the Legion ballroom in Old Town. 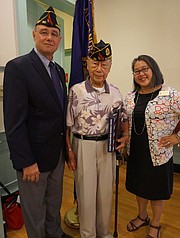 Dan Dellinger, 2014 National Commander of the American Legion (left), with World War II veteran Col. Kim Ching (USAF, ret.) and Anh Phan, who presented Ching with a flag flown over the U.S. Capitol on behalf of U.S. Sen. Mark Warner. Ching, a past commander of Post 24, celebrated his 90th birthday May 25.

Vietnam veteran Jim Glassman was sworn in for his third term as commander of American Legion Post 24 in Alexandria during a June 10 ceremony to install the organization's 2015-2016 slate of officers and board members.

“The American Legion has worked hard to protect our veterans,” said Dan Dellinger, the 2014 national commander for the organization. “We are here to honor those who have served our nation and I salute Post 24 for your continued efforts to help those in your community.”

Dellinger, a long-time critic of the Department of Veterans Affairs’ handling of medical care at VA facilities, was on hand to administer the oath of office during the installation ceremony at the Legion’s ballroom in Old Town.

Also attending the ceremony was Anh Phan, a representative of U.S. Sen. Mark Warner. Phan made a surprise visit to present World War II veteran Col. Kim Ching (USAF, ret.) with a flag flown over the U.S. Capitol in recognition of Ching’s service and 90th birthday May 25.

“I never expected anything like this,” said Ching. “I am very honored by Senator Warner’s kindness.”

“American Legion Post 24 has been helping the veterans of our community since 1920,” said Glassman, who was Virginia’s Legionnaire of the Year in 2013. “Our mission will always be to honor those who have and continue to serve our country.”