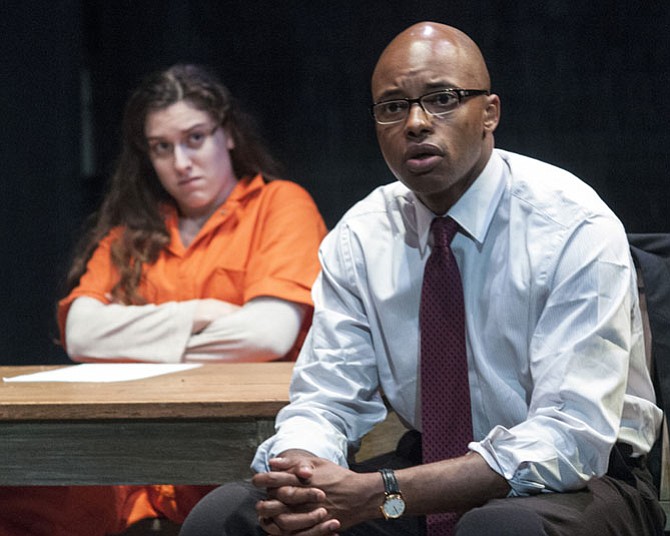 From left -- Dani Stoller as Evelyn Laverty, and Manu Kumasi as Vincent Heffernon in "The Good Counselor" at 1st Stage. Photo by Teresa Castracane/Courtesy of 1st stage

If you are seeking out magnetic theater that deals with unsettling, yet real-life, family issues and a search for the truth, make your way to 1st Stage. Under the confident, wise direction of Alex Levy, Kathryn Grant’s award winning “The Good Counselor” is an evening of riveting performances.

“The Good Counselor” is disquieting as it circles around Vincent, a young public defender (convincing, nuanced Manu Kumasi) trying to understand and defend his client Evelyn (Dani Stoller full of tics and understandable rage). She is a mother accused of killing her 3-week son. Vincent must also come to terms with his own mother Rita (Deidra LaWan Starnes, judgmental with cause woman), who helped him succeed in life, but who seems a stern, hard-hearted woman dealing with the passing of her violent son Ray (charismatic Bueka Uwemedimo) to drugs, the older brother Vincent worshipped.

Add in that the defendant Evelyn is an angry, poor, rough-edged, perhaps racist Caucasian woman, and the public defender Vincent is a polished, confident, though fragile, African-American attorney. The attorney is guided to a deeper examination of life with the help of Maia, his supervisor (Alina Collins Maldonado).

It is Maia who reminds Vincent that “You must entertain all the possibilities. Mothers do all sorts of things that people don’t want to think about.” And his own mother’s reactions to his probing, “You will never know the truth of my life. Children never know.”

There are several scenes in this two act production that are searing in intensity and focus. For example, the audience will truly think itself on a train trestle with an oncoming locomotive with life in balance.

The 1st Stage technical artists have designed a vast two-level set for the cast and the audience. It seems to have depth well beyond a physical space thanks to Kathryn Kawecki (set and costume designer), Robbie Hayes (lighting design), Rachel Barlaam (sound design), Debra Crerie and Kay Rzasa (props design) and Megan Behm (fight choreographer).

“The Good Counselor” is unhesitating in its aim and success at being meticulously thought-provoking. Furthermore, the audience finds itself as a jury of Evelyn’s peers deciding her fate.

For those with a taste for the forthright complexity of human life, without formulaic characters and situations, Kathryn Grant’s “The Good Counselor” warrants high-praise. The 1st Stage production has a brio of subject matter, terrific acting, and a “you are there” presence. It is powerful.