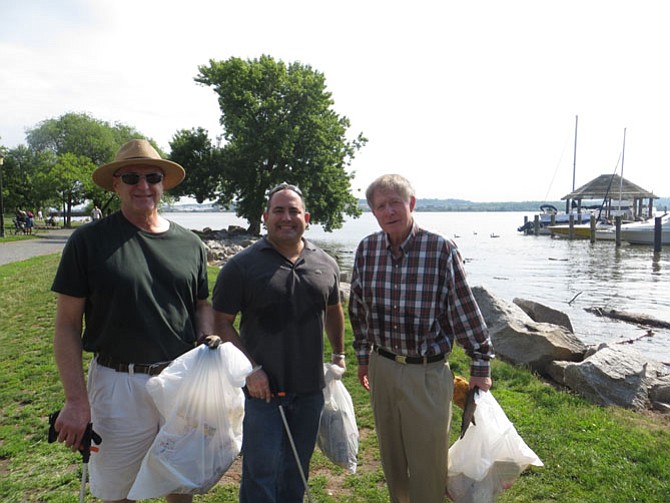 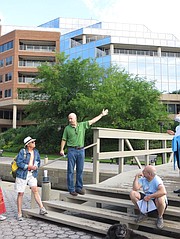 Larry Ray, co-owner of Blackwall Hitch, gives the Waterfront Commission a tour of the new restaurant.

Alexandria Waterfront Commission meetings are usually held in a crowded room at City Hall. But at 9 a.m. on June 6, the commission took its meeting to the streets, visiting sites all along the waterfront, from Tide Lock Park in North Old Town to Windmill Hill Park near Jones Point Park in the south, amassing a following of city staff and local citizens along the way.

At Tide Lock Park, Greg Rawls from American Real Estate laid out the preliminary plans for changes to the area. “The ownership is pursuing beautification in and around the Lock,” said Rawls. “We’re looking for ways to revitalize the area, specifically we’re putting plans together for waterproofing the base.”

Waterproofing the Lock would mean water in a currently empty concrete basin, but Rawls emphasized that there’s no intention of filling the Lock, only putting a little water at the base.

Other plans for the area included lowering a fountain in a central plaza to provide local citizens with a more uninterrupted view of the waterfront, but Rawls said these plans have not been approved by the City Council yet.

Further south, Robert Kearns laid out city plans for Robinson Terminal North. According to Kearns, the ground floor of the redeveloped area will be retail and restaurant space with residences above. Kearns also noted that a 115-120 room hotel was docketed for approval this month but is being pushed towards the end of the summer.

“There are some complex problems at this site with a lot of moving parts,” said Kearns. “The pier here is not in as good a condition as the pier at Robinson Terminal South.”

Without an accessible pier, barging construction material to and from the site would be unlikely, which would potentially mean truck haul routes through North Old Town. The city recently faced a legal battle over haul routes in Robinson Terminal South, and while the city ultimately won a lawsuit that had escalated to the Virginia Supreme Court, a compromise was reached with developer EYA to primarily use barging for construction access to the site.

Kearns also noted a small but vital addition to the Alexandria Waterfront: public bathrooms on the western side of the Blackwall Hitch restaurant. The restrooms were opened on Monday, and despite Kearns’ suggestion, there was no toilet paper-cutting ceremony.

“This is something the commission worked a lot on,” said Jody Manor, a member of the Waterfront Commission and owner of the Bittersweet Cafe. “I walked in and realized … wow, we’re making progress on the Waterfront.”

The tour ended at the Shipyard and Harborside parks, the southern tip of the city’s waterfront redevelopment plan. Shipyard Park currently suffers from degradation to a rope barrier erected around the bulkhead, which city staff said has become a weekly maintenance issue. Staff also said the city is looking into rounding the interior of the basin, which currently has sharp angles, to reduce the amount of trash left against the bulkhead by tides.