Two other T.C. Williams boats among fastest in nation. 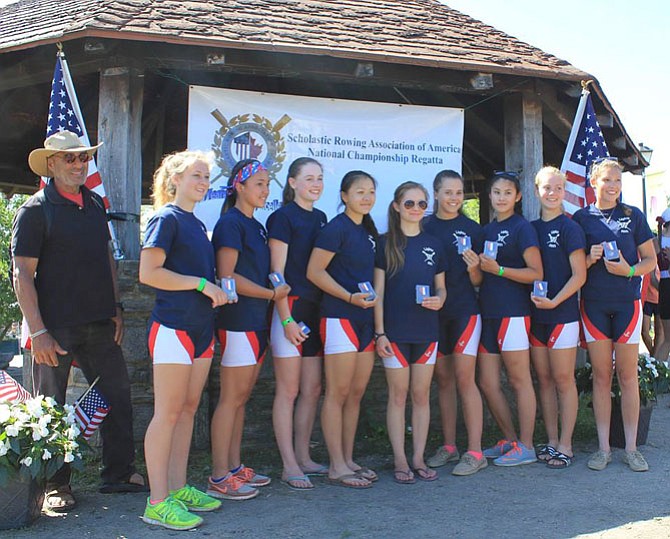 Seven T.C. Williams crew team boats qualified to compete in the Scholastic Rowing Association of America’s National Championship Regatta on the Cooper River outside of Camden, N.J., this past weekend.

The T.C. girls’ freshman 8 battled a field of tough competitors to reach the final, where it finished fourth in the National Championship Regatta

By the time the last race had been run, T.C. had captured a bronze medal, a fourth- and ninth-place finish, three additional semifinal slots, and one “repechage” seeding.

Excelling in three intense races, the T.C. girls’ varsity light weight 8 boat captured the bronze medal, making it the third fastest boat in the country in its category. The light weights won their first heat handily and then battled against a slate of fierce competitors in the semifinal. Winning a spot in the finals, the Titan lightweights mounted a powerful sprint from behind to capture the bronze medal, bested only by powerhouses Winter Park and Mount St. Joseph’s Academy. The light weights posted times of 5:02.06 in their first heat and 5:07.913 in the final. This medal follows another bronze medal last week at the prestigious Stotesbury Regatta and a gold medal in the Virginia Championships two weeks ago.

T.C. Williams girls’ head coach Patrick Marquardt said, “I’ve been really impressed by the light weight girls’ dedication this season. They are strong rowers individually and work well together as a team. The fact that they are a young boat, with only one senior, bodes well for T.C. as a competitor next year in this category.”

The T.C. girls’ freshman 8 boat also showed its strength, powering through its first heat and semifinals to compete in the final round. During the final, the girls charged down the course, crossing the finish line fourth, about 4 seconds behind the bronze medal boat. Its time was 5:19.181. Members of the boat include Camila Cardwell (coxswain), Hope Parsons, Grace Vannatta, Madeline Gyllenhoff, Grace Hogan, Emma Carroll, Tess Moran, Cleo Lewis, and Rachel Sedehi. Titan head girls’ coach Patrick Marquardt guides the freshman 8.

The boys’ first varsity four also turned in a strong performance in a highly competitive category. Making it to the semifinal round, the first four boat placed third, with only the first two boats going to the final round. The Titan boys then participated in the Petit Final, which decides the seventh-12th positions. With a powerful final sprint, they captured third place, earning the position of the ninth-fastest boat in the country. This boat had won the Virginia state championship two weeks before, demonstrating its strength. Members of the boat include Angelo Leitner-Wise, Carter Weitekamp, Preston Tracy, Tyler Souza, and Anthony Ponichtera (coxswain). The boys’ first 4 is guided by coach Pete Hearding.

Other T.C. boats that qualified for the nationals based on their strong performances at states were the girls’ first varsity 8, the Titan freshman boys, the girls’ second varsity 8, and the Titan light weight boys. The Titan freshman boys, gold medalists in Virginia, poured on the power through their first heat and the semifinals. In a pitched battle with LaSalle as it crossed the finish line, the Titans placed fourth, one second behind third place LaSalle, ending their medal hopes. However, with a time of 5:05.196, the frosh ended the season strong. The Titan boys’ light weight also raced fast in the heats and semifinals. The boat posted a time of 4:49.610 in the semifinals. The girls’ second 8 also advanced to semifinals, posting at time of 5:32.077. The girls’ first varsity 8, Virginia State champs, showed its strength in its heat and posted a time of 5:02.161 in the “repechage” or second chance race. All of the T.C. boats posted impressive times and beat some outstanding boats.

The T.C. Williams crew team will take to the water next when they travel to St. Catharines, Ontario for their last race of the season, the Canadian Secondary Schools Rowing Association’s Championship Regatta. The race will be held the week after next, on June 5-7.

This week, the Titans will take a break from competition and hold their annual awards ceremony. The ceremony was held May 26 at the Dee Campbell Boathouse in Old Town.