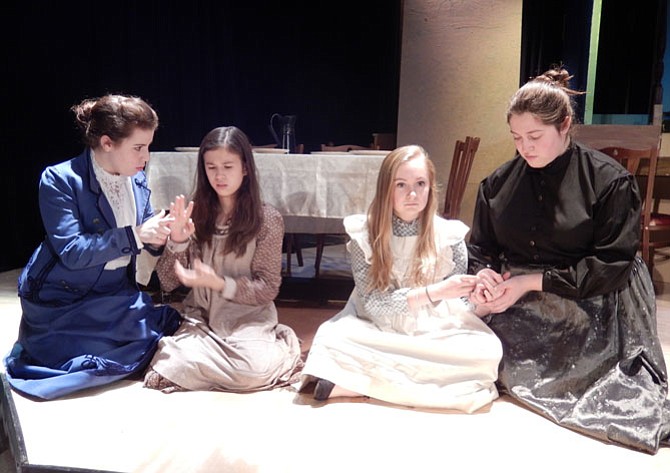 Celebrating the best in high-school theater, the 16th annual Cappies Gala will be held this Sunday, June 7, at 7 p.m., at The Kennedy Center in Washington, D.C. Fairfax High is up for nine awards for “Big: The Musical,” and Paul VI High, six, for its play, “The Miracle Worker.”

“This year, we really focused on stepping up our game,” he said. “We challenged ourselves with set construction, building a pair of fully-functional, two-story houses. We amped up choreography, highlighting our incredibly talented ensemble, and we incorporated technical design elements that showed off our techies’ vision and creativity.”

“I am so proud of the entire cast and crew for the recognition they have received,” continued DiCenzo. “All of us cannot wait to celebrate the arts with the rest of the schools at the Cappies Gala. It is the social event of the season, after all.”

The young thespians who brought “Big: The Musical” to the stage are thrilled, as well. “I’d like to thank the Cappies for nominating us nine times,” said sophomore Zion Jang. “We worked super, super hard on the whole shebang, so it’s nice to know we are recognized for our awesomeness.”

“The cast and crew of ‘Big’ are so excited about our nominations,” said senior Doug Klain, who played the lead role. “It is humbling to be recognized like this by our peers and such an honor to be asked to perform at The Kennedy Center for the Cappies Gala.”

“It is such an honor to be nominated for nine Cappie awards,” added senior Caroline Silas. “The cast and crew of ‘Big’ are incredibly proud to be associated with such an honorable organization and even more proud that the critics found the production worthy of recognition.”

AS FOR PAUL VI, Director Kathy d’Alelio was also delighted. “Receiving six Cappie nominations is the icing on the cake – and the ice cream, too – of our experience presenting ‘The Miracle Worker’ last fall,” she said.

“I’ve known that our Leading Actress and Comic Actor nominees, Isabella Whitfield and Joey Arzeno, respectively, possess great talents as actors,” she continued. “However, both achieved levels of depth in their performances that they had never before shown. How proud I am of them, and what a gift to be a part of those breakthroughs.”

Discussing the other nominations, D’Alelio said the Ensemble, The Servants – Tommy Kelleher, Margaret Mitchell, Caroline Dragone and Brooke Stanley – “successfully portrayed characterizations of people serving in the Keller household, not just actors changing the sets. And the Props Crew – Ally Kraft, Sarah d'Esopo and Amanda Kruczkowski – not only had to find props, but 1800’s period items, and they came through beautifully.”

Regarding the Stage Crew of Tommy Kelleher and Lilly Cecil, d’Alelio said they “worked beautifully to move us from Boston to Tuscumbia, not showing the effort that made these changes happen. And Our Rising Critic, Kelsey Loesch, a prolific writer, showed great talent as a member of our critic team.”

All in all, said d’Alelio, “I am so proud of our entire company of actors and technicians who supported these nominees and helped contribute to their successes. Even though we would love to take home those trophies, it truly is an honor to be nominated, to have the work of our students recognized.”