Kudzu: ‘The Vine That Ate the South’ Spreads in Potomac
Votes

Kudzu: ‘The Vine That Ate the South’ Spreads in Potomac 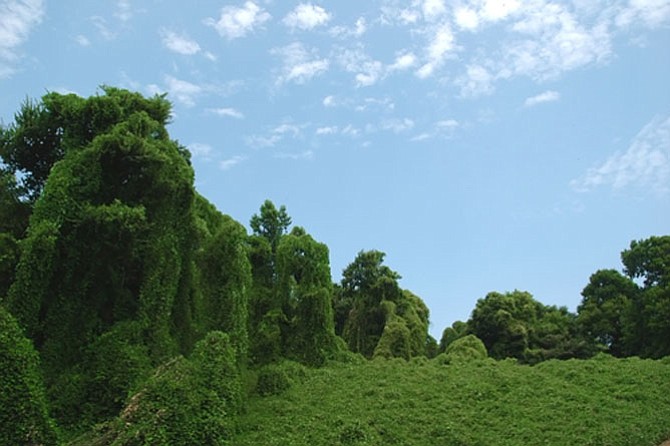 A close-up of the kudzu leaf

Most people living in the Potomac area are used to a sight common along the beltway and area roadsides. That is, thick masses of coiling, dark green vines climbing all over other native trees and shrubs. This plant is known as kudzu. And like it or not, its reputation is spreading.

What is kudzu, exactly, and how did it get here? Also known as Japanese arrowroot, kudzu’s scientific name is Pueraria montana, var. lobata, a species related to the legume family. Deep green and naturally aggressive, it is a perennial vine native to East Asia and the Pacific. Its name comes from the Japanese kuzu.

Kudzu was introduced to the United States in 1876 during the Centennial Exposition in Philadelphia where it was featured as an ornamental vine on the Japanese pavilion. Easy to grow and virtually maintenance free, the large-leafed plant with fragrant purple flowers captured the interest of the American public.

About a half-century later, farmers began to observe that kudzu could also be used as a cheap source of animal feed for their grazing livestock. And, as the thick vines carpeted the ground, it helped prevent soil erosion. Recognizing this, the United States Department of Agriculture (USDA) began importing kudzu for erosion control in the 1930s.

From about 1935 to the mid-1950s, the USDA encouraged farmers in the south to plant kudzu on their land, in some cases paying them a subsidy of $8/day. Over 1 million acres of kudzu were planted during this period, as farmers sowed their fields with the invasive vine.

It didn’t take long for things to get out of hand, though, and kudzu began spreading rapidly through the southern states, prompting some people to label it “The Vine That Ate the South.” It gobbled up other plants as it rapidly reproduced, covering hundreds of acres of land per year. Finally in the late 1950s, kudzu was recognized as the noxious weed it had become, and the Agricultural Conservation Program removed it from the list of acceptable species. In 1972, the USDA classified it as a weed.

Kudzu now grows primarily in the northeast U.S., where it is invasive in naturalized areas extending from Connecticut to Florida and as far west as Texas. Growing with alarming speed, it has become a serious threat to other native plants. Kudzu spreads by runners that root at the nodes to form new plants. According to the National Park Service, the vine grows as much as 60 feet per season, or about 1 foot per day.

By some estimates, kudzu is spreading at the rate of 150,000 acres annually. The plant is easily outpacing attempts to control it either by herbicides or mowing, or a combination of both. Left unimpeded, the large-leafed vine easily blankets other species, plunging them into deep shade and depriving them of light. Coiling around tree trunks and other woody plants, it sometimes uproots them entirely as it smothers the landscape.

Yet, across the world, kudzu has had many uses, going back centuries in time. The root, which can grow up to the size of a human being, has been an integral part of traditional Chinese medicine for centuries, where it is known as ge gan. Modern medicine also recognizes the kudzu root as a good source of isoflavones, which have shown promise in treating migraines and cluster headaches.

Still others insist the vine has value in the landscape, where it aerates the soil with its deep taproots that act as pipelines for minerals to flow from subsoil to topsoil. And, it continues to help with erosion.

Kudzu blooms from the end of July through December, sending forth purple flowers with a scent reminiscent of grapes. Perhaps that’s why there are so many recipes for kudzu jelly. Some admirers of the vine swear its flowers can detoxify the liver and provide an effective hangover cure.

In Asia, kudzu leaves have been used for centuries to make herbal teas and tinctures. And in Japan, the vine’s root is often substituted for cornstarch.

Lastly, there is kudzu art. Regina Hines, a textiles artist, has been working with the woody plant for years. Weaving the vines into baskets, jewelry and other vessels, she embellishes her art with crystals, beads and silver. Her stunning work has been featured in galleries, museums and art centers across the country.

A word of warning: Before you go out foraging along the roadside for kudzu for medicines, tea, jelly or art, first make sure that it hasn’t been sprayed with herbicides.