Alexandria: Masked and Hungry Critters Are Coming Down to Earth
Votes

Alexandria: Masked and Hungry Critters Are Coming Down to Earth 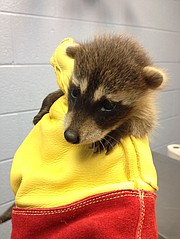 A raccoon kit just a few weeks old rests in the glove of an Animal Control officer who rescued it.

Alexandria — This is the time of year when Alexandrians might step out into a yard or alley and encounter a masked creature, wearing stripes. Raccoons, born in the trees in spring, are descending to street level to search for food.

Though they’re nocturnal, it’s not unusual for an urban raccoon to walk around during the day, says Animal Control Officer Tammy Doran of the Animal Welfare League of Alexandria (AWLA). Raccoons are well adapted to city life, she points out, and when they can’t pursue a typical diet of berries, they find sustenance in what people leave behind in their trash cans.

The AWLA, which operates the city’s Vola Lawson Animal Shelter, responds to calls from citizens concerned about raccoons they’ve spotted, especially in the summer. Doran says that if the animal appears healthy, citizens should leave it alone. But AWLA officers regularly come to the rescue. Earlier this summer a limb of a tree in Alexandria bearing a raccoon nest broke, sending the babies to the ground. Still solid brown, without the adult mask and striped tail, the weeks-old kits were screeching for food but allowed a gloved Animal Control Officer to pick them up and bring them back to the shelter. The shelter sent them on to a wildlife rehabilitator for a second chance at life.

Raccoons can wind up with a rehabilitator for many reasons: being accidentally left behind in the nest, getting struck by a car, or being attacked by a dog or other animal. Virginia has some 300 permanent wildlife rehabilitators, some specializing in nursing injured raccoons back to health, even those with serious injuries such as a broken leg or jaw.

“They try to raise them in groups like they are in the wild,” said Dr. Dave McRuer of the Wildlife Center of Virginia. “Raccoons are very social, dynamic animals.” McRuer says that citizens who come across a baby raccoon should not assume that it has been orphaned. A mother raccoon often moves her brood from den to den, and she does it by carrying each kit in her mouth, one at a time.

Raccoons are the most common vector of rabies in the United States (the others being skunks, foxes and bats), and the U.S. Centers for Disease Control data put the East Coast at the center of the nation’s reports of rabid raccoons. A raccoon might be rabid if it appears disoriented or aggressive, Officer Doran says. The Virginia Department of Health has recorded only one case of wildlife rabies for Alexandria this year, and it was a raccoon, says environmental health biologist Daniel Sherwood of the Alexandria Health Department, which works closely with the AWLA on suspected rabies cases. The larger nearby jurisdiction of Fairfax County, however, has logged 10 rabid raccoons this year.

Sherwood points out that mandatory rabies vaccines for pets have helped greatly reduce rabies among dogs in the United States; less than 10 percent of all rabies exposures involve domestic animals such as dogs and cats. But each year some 40,000 people in the United States receive rabies shots because of a possible exposure to a rabid animal. And some 55,000 people die every year from rabies around the world, many of them due to contact with rabid dogs. Sherwood recommends three actions citizens can take to avoid rabies:

“We’re very fortunate that Alexandria only averages one case of rabies a year,” Sherwood said.

Operated by the Animal Welfare League of Alexandria, the Vola Lawson Animal Shelter is at 4101 Eisenhower Ave., Alexandria, VA, 22304. Visit www.alexandriaanimals.org or call 703-746-4774.