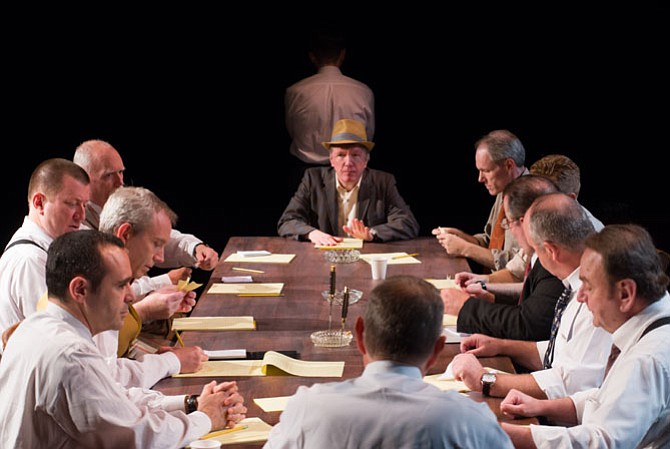 The American Century Theater (TACT) in Arlington is staging "Twelve Angry Men" as its final play, now through Aug. 8, at Gunston Theatre Two — culminating 20 years of staging local theater productions, and finishing off with the one show that began it all.

TACT Artistic Director Jack Marshall is also the co-founder who directs an all-star cast of TACT veterans. He said the reason that he chose it for the last production was because "no other show more perfectly embodies what the company has been trying to achieve over the last 20 years."

To begin with, it was a production that he directed back in 1992 that sparked the idea for the company in the first place. "'Twelve Angry Men' was the reason we are a company," he said.

He was contracted to do the play by the Association of Trial Lawyers of America for their board meeting at the Georgetown Law Center for one showing. Afterwards, they got to talking about there being no big drama productions by important writers like Tennessee Williams or Arthur Miller or Eugene O'Neill that were being produced by local community theater in D.C. during that time period.

After bouncing the idea off a few people and a visit to the Arts Incubator Program, which was just getting started in Arlington under the auspices of Jon Palmer Claridge, the idea was born to start their own theater company. "So we got a chance. We got a test run at this space (Gunston), and I said, let's do 'Twelve Angry Men' again."

"Twelve Angry Men" originated as a live teleplay by Reginald Rose in 1954; it was made into the 1957 film starring Henry Fonda with elements of film noir. Written and co-produced by Rose and directed by Sidney Lumet, the film tells the story of a jury made up of 12 all-white men as they deliberate the guilt or acquittal of a defendant accused of killing his father.

Marshall, whose background is a lawyer, describes the play as a 12-person continuous scene "where none of the actors ever leave the stage for more than a second," he said. "One giant conversation. No one ever uses anyone’s name. It’s improvisational, ideally by nature. Like the film, it's about a whole jury. It's about what makes every one tick and switch back and forth ... It’s a great experience."

Marshall said the show gave him the chance to cast the six or seven actors that have done the most work for TACT, and given the company their talent and time, and made it into what it is today, and are some of the finest actors he's ever worked with.

"Every one of these 12 actors were invited by me personally," he said. "Everyone said 'yes, for the last TACT show I want to do it.'"

The ensemble includes five of the original cast members and all of them have worked in other shows and with each other, at TACT.

"They all know me. They are actors I've directed in shows in the double-figures. They know each other. We had instant trust and instant ensemble. I know how they like to work," said Marshall, who directed the show on four different occasions. "We got off to a flying start and we've been able to get into layers in this wonderful script that I've never touched before. It's a constant revelation and a constant joy to be able to do this with brilliantly talented people, but friends. There couldn't be a better final show."

At its beginning, he said he couldn't get the stage version of "Twelve Angry Men." "Those days, the only way we had that script was my wife had transcribed it off a tape recording of the movie," he said. "The film script worked beautifully on stage. It's continuous, it's in real time, it's an hour and 50 minutes intense."

Steve Lebens plays the role of Juror # 8, acted by Henry Fonda in the movie version, who starts off the problem that the jury has to face because he is the only one that will not vote guilty at the beginning of deliberations. "It's that classic story of one person standing up against a group of people who are of a different opinion," he said. "A lot of other jurors do see me as the troublemaker."

He added: "The challenge of finding this character's journey, and how he changes in the course of this two hours of deliberations, and where his flaws are — that was really fun to find."

He said it's a fun story to follow to see how it's going to come out — and how the audience is going to arrive at a solution. "But for everyone, I hope that they find it a compelling and fun night of theater with a great ensemble."

Mike Replogle plays the role of Juror # 3, one of the main antagonists in the production. "He believes the boy is guilty and that all the facts point to the guilty verdict," he said. "He's one of these guys who likes to follow the rules; he doesn't like people to mess around too much with the rules."

He added: "What you'll see is that most of these people have their own agendas that sometimes have very little to do with the case itself ... about whether the boy is innocent or guilty."

In the original production that opened American Century Theater, he played Juror # 8. Now he's turning around and playing the head of the opposition. "And I have to tell you it's a real mind job. I have to think about it in a different way than I did before ... And I say, 'Wait a minute; no one can be that positive. You're a jury; you need to discuss this. It's a human being's life.'"

The American Century Theatre is staging "Twelve Angry Men" through Aug. 8 at Gunston Theatre Two in Arlington. Tickets are $35 and $40. For group sales, contact boxoffice@americancentury.org. Tickets can be ordered by calling 703-998-4555. The venue is located at The Gunston Arts Center, Theatre II, 2700 South Lang Street, Arlington, VA 22206. Visit www.americancentury.org.

Interviews for this story were conducted by Emily Morrison.