People and Pets in Great Falls

Josh and Jill Baker have one rather unusual pet, a corn snake, with the clever name Cornelia. The Bakers came to have their pet when their older daughter, Danielle, volunteered at a nature center in North Carolina where one of the corn snakes had babies, one of which Danielle took home to Virginia. Luckily, according to Jill, the snake is not hostile, as it is very calm and lets people hold it. The snake’s diet is a little inconvenient, however, as it eats frozen mice. One time, Josh received a FedEx package, and “I thought it was some clothing I ordered,” when in fact, “I opened it up and it was frozen mice in dry ice!”

Although the Bakers enjoy their snake, Cornelia, who they have had for three years, they have an even deeper connection with their rescue dog, Izzy, who they adopted this past year. “We felt strongly about rescuing a dog that might otherwise be euthanized,” Jill said, “so we adopted our last two dogs from rescue organizations because so many dogs need homes.” The family picked Izzy because she is goofy-looking, with her ears sticking out flat, like Yoda, according to daughter Danielle. Josh, meanwhile, compares Izzy to Ferdinand, the famous bull from the children’s book, since they both like to “smell the flowers just quietly.” 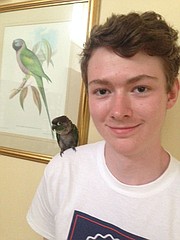 Andrew McCausland just graduated from Langley High School and plans to attend the University of Virginia, and though numerous other Langley students will do the same, McCausland stands out from the crowd thanks in part to his beloved pet, an 11-year-old Green Cheek Conure named Squawky. Squawky is in the middle of his life span right now, as his life expectancy is 25-30 years. The bird has a “quirky” personality, according to McCausland, who called him “energetic [and]… always excited to meet people.”

Squawky’s cage is filled with Amazon boxes, as he spends most of his day inside the boxes making nests. If it’s not doing that, Squawky is eating. Andrew’s family gives Squawky a lot of freedom, letting him play in the sink during baths, which he loves, and feeding him all kinds of food, from Cheez-Its to the family’s dinner each night. The bird has a special bond with each family member, McCausland said. “He loves my mom because of her hair. He likes resting on top of [her] hair and playing with [it.] He understands my dad is the leader of the family and always giving him snacks. He sees me as a father figure.” 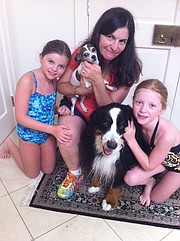 From left -- Shelby, Suzanne, and Sarah Irwin with their dogs, Lucy and Stella.

The Irwin family absolutely loves pets. They have seven that they take care of each day: two dogs, two cats, one bunny and two horses. The mother of the family, Suzanne Irwin, said her love for pets stemmed from their warm-hearted personalities. “Pets are very innocent; they’re very loving. They give a lot of affection. They need you.”

Each member of the Irwin family has a special connection with certain pets. Suzanne feels close with the dogs, Lucy and Stella. Lucy is an adorable toy rat terrier, while Stella is a large, furry Bernese mountain dog. Daughter Shelby has a bond with the cats, Pikachu and Sylvester, and even though Pikachu is not very outgoing and people-friendly, “Shelby can pick her up,” according to Suzanne. Shelby’s twin sister, Sarah, is close with the bunny, Fuzzy Bug.

With all these animals under one roof, especially the cats, dogs and bunny, one might think that the pets wouldn’t mesh. Luckily, however, the family reports that all the pets get along. Suzanne added, though (smiling), that “We have enough pets!”

The Schnells might seem to be a family of four, but they are actually a family of 10, since, according to mother Dawn Schnell, the family’s six pets are “really part of the family. They’re family members.” The extended family includes three dogs, a hermit crab, a freshwater suckerfish, and most unusual of all, a bearded dragon.

The bearded dragon belongs to Dawn’s 12-year-old daughter Katherine. Dawn was originally skeptical about having a reptile for a pet, but was convinced when Katherine did “three or four months of research” on the lizard, and created a chart about how she could pay and care for it. The pet store where Katherine bought her bearded dragon told her the animal was a boy, who she named Sandy, but upon further research in the lizard encyclopedia, Katherine realized it was actually a girl. “Thankfully,” said Katherine, “Sandy’s a gender-neutral name, so it worked out!”

As for the family’s more conventional pets, Ruby is the eldest dog, a 15-year-old blue tick hound-golden retriever, but she still manages to get along with the youngest dog, a 3-month-old shepherd-boxer mix puppy named River. In between is Mudge, a 3-year-old Swiss shepherd mix, who is 10-year-old Charlie’s favorite. Explains Dawn, “It’s really nice for kids to grow up and see the circle of life and what it takes and that commitment.”

Samantha Grayer smiles in front of her home aquarium.

Samantha Grayer, 8, and her parents have three pets: a shiba inu dog named Bradley, a Siberian Cat named Leo, and an aquarium filled with tropical fish and other sea life. Despite the stereotype of feuding cats and dogs, Bradley and Leo are best friends. “Leo is very attached to Bradley,” said mom Jackie Grayer. “When we bring [Bradley] in from a walk, Leo will jump on him and put his arms around him, like he’s hugging him.”

The dog, Bradley, is closest to Samantha and Jackie. As Jackie says, he is “more of ladies’ dog.” However, dad Larry is in charge of the fish tank. As he explains, “Everything you see in there is alive,” from colorful clownfish and blue damsels, to waving coral, to multiple kinds of crabs and shrimp, to nearly 100 starfish. The Grayers got lucky with their aquarium, as most of the bunch has been together, surviving, for the past seven years.

In addition to the family’s three permanent pets, they often have “visiting pets,” according to Larry. At the moment, their visiting pet is an American toad from their backyard creek named Tommy. Tommy is just one of many examples of Samantha taking in or taking care of animals in her neighborhood, from baby birds and turtles to snakes.