Vienna: A Journey of Faith
Votes

Vienna: A Journey of Faith

The Boone family of Oakton honors daughter by giving others a chance at football victory. 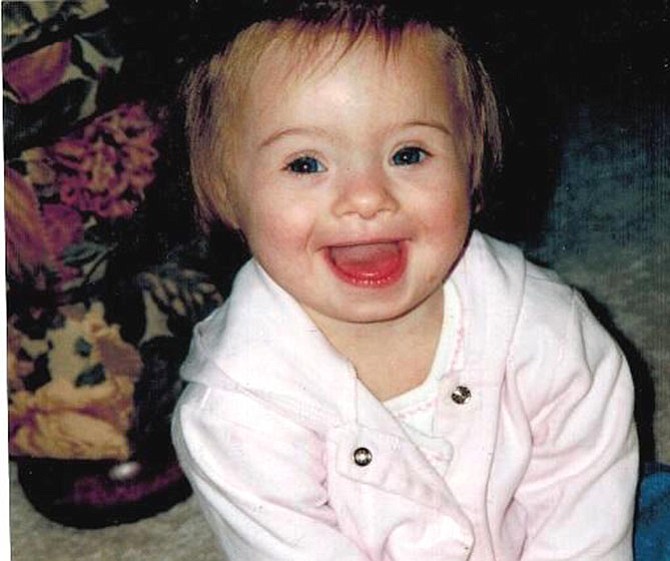 Faith Boone at 18 months, smiling her angelic smile during the Christmas season in 2003. Photo contributed

Youth football in Vienna and Oakton is an all-encompassing family affair, with players’ parents and grandparents running the concession stand and the chain gangs while cheerleading sisters wave pom-poms and younger brothers hustle during half-time to get the players water.

After most home games at Waters Field, families show their football pride by orchestrating elaborate cookouts for players and fans.

Some families become football legacies, and for nearly two decades, the Boone Family of Oakton has been a well-known and well-liked fixture on the local football scene. 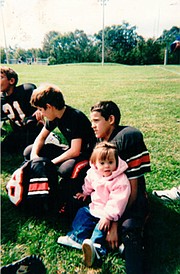 Faith Boone and brother Jimmy Boone, who is now a football coach at Oakton High School, during a VYI football game in 2002.

“They were an inspirational family,” said longtime Vienna resident JoAnn Marcus. “Part of the fun of going to the games was seeing their youngest children, Faith and Mark, waving and cheering on their big brothers.”

In 2003, Jimmy and Andy Boone were clear fan favorites, the ones to watch as they scored touchdown after touchdown, and intercepted numerous passes.

But the real “football” stars of the Boone family were the ones too young to play the game.

VYI FANS REMEMBER how Faith, Jimmy and Andy’s little sister - a spirited, energetic towheaded 2-year-old born with Down Syndrome - inspired a special kind of team spirit in the crowd as she flashed her vivacious smile at everyone who passed by.

Her older brother Mark, just a year older than Faith, was always at his sister’s side at games, proud and protective, holding her hand as they walked among the crowds.

“Faith’s life was an uphill battle,” said father Jim Boone. “However, when she looked at you with her sparkling blue eyes and her beautiful big smile, your heart filled with joy and it was Faith’s way of telling you, ‘I’m doing great! Never give up…’”

It was a small miracle that Faith was born at all.

In the early spring of 2001, Susan Boone learned she was pregnant with her fourth child. The family was ecstatic when they learned that Susan was carrying a girl after giving birth to three boys.

But after a series of routine medical exams, when Susan was four months pregnant, her obstetrician called the couple into his office with heart-wrenching news.

“He told us ‘your daughter most likely has Down’s syndrome, and as a parent, I would highly recommend you abort this child’,” Jim Boone said, recalling that fateful day. “Susan and I looked at each other. We are Catholic, and there was no way we could not give this child a chance at life…When she was born, she was one of our greatest gifts.”

On May 23, 2001, Faith Susann Boone was born, weighing in at just less than four pounds and fighting for her life.

Jim and Susan said watching their daughter struggle to do the things most parents take for granted was a testament of their faith.

It was eight months before Faith could hold her head up. Over a year before she could sit up. And three years before she took her first steps and could walk. Daunting? Not for Faith.

“She was anything but a quitter. She took the endless visits to the doctor, the physical therapists and the surgeries in stride, always giving us that beautiful smile,” Jim said.

“As her parents, we assumed the role of a teacher. Her older brothers served as role models. However, it was Faith who taught all of us the definition of strength and determination. Faith reminded us daily to never give up and to cherish the little things in life. She opened my family's minds and hearts to embrace the differences in others.”

THE FAMILY’S FAITH was severely tested soon after Faith’s third birthday. In June of 2004, Faith was scheduled to undergo a fairly routine surgery to correct a heart-valve deficiency common in children with Down syndrome.

“We knew it would be an eight hour surgery, but we were told everything looked good,” Jim said, his voice cracking. “I remember Faith smiling her beautiful smile when they wheeled her into the operating room. She was smiling, and we let her go…never thinking it would be the last time we saw our baby girl…”

As Jim and Susan waited anxiously in the waiting room, eight hours went by, then nine, ten, eleven…

Something was clearly wrong. After several hours of vague assurances from the doctors, Jim and Susan learned that the doctors discovered during the surgery that they did not have the proper size of replacement valve to repair Faith’s heart. A longtime Vienna pediatrician and friend, Dr. Robert Schwartz, who founded Vienna Pediatrics, rushed to the hospital to advocate for Faith and The Boones. Surgeons scrambled to find another valve in time for Faith.

They didn’t. Faith passed away on the operating table.

“How do we go back and tell the boys that their sister died? The operation was supposed to be routine, we hadn’t told them she might not come home. It was a shock for everyone.”

Jim and Susan said they almost lost their faith in God that day. Susan said she remembers the familiar words of the Catholic Catechism coming to her, when Abraham fulfills the definition of faith in Hebrews 11:1: "Faith is the assurance of things hoped for, the conviction of things not seen.”

Searching for a way to pull out of his grief and honor Faith’s memory, Jim was reminded of all those times at Waters Field with Faith cheering on her brothers, and inspiring the crowds.

FOOTBALL WAS CENTRAL to the Boone family, and Jim, devastated by the loss of Faith, would ultimately chose football to remember Faith and raise money for Jill’s House, a respite care facility established by McLean Bible Church founders Lon and Brenda Solomon in remembrance of their daughter, Jill.

Jim went to work building 7on7 University, which runs tournaments and camps during the offseason to help football players stay sharp and further develop their skills, and have fun in a competitive environment. Every 7on7 event includes a remembrance of Faith and is a fundraiser for Jill’s House and other local charities. Jim is CEO, and both of his sons – Jimmy and Andy – participate by running similar camps for youth.

7on7 National Championship This Weekend at Oakton High

7on7 holds its national championship tournament this weekend, July 10-11, at Oakton High School. Teams from across the country will be there. Competitions will include the 7on7U National Passing Tournament, The 7on7U Linemen Team Competition, and The 7on7U Kickers Challenge. The event is open to the public.

Jim has now largely handed off running the 7on7 events to his sons Jimmy and Andy, who are enthusiastic to continue the effort as a family tradition.

Jimmy and Andy wore the number 3 during their careers at Oakton High School, and Mark, who starts at Oakton this fall, asks all of his coaches to let him wear the same number.

“Faith is my family’s inspiration,” said the younger Jimmy Boone, who is now a popular coach at Oakton High.

“There is purpose,” Jim Boone said. “My boys would not be the boys and men they are today without having known Faith, and having to cope with her loss.”