Volunteer artists work with soldiers suffering from PTSD to express themselves visually. 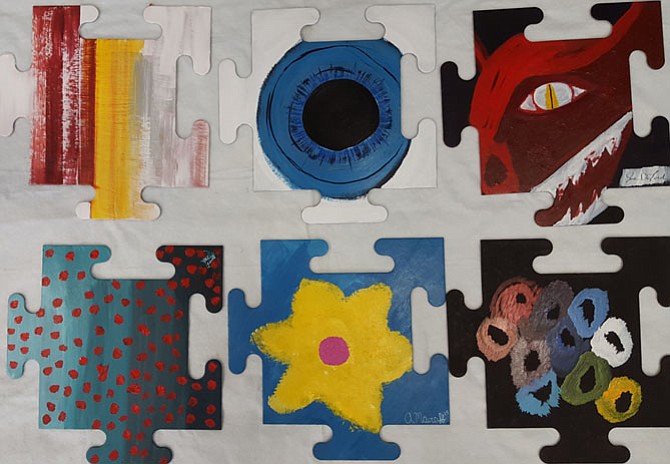 Individual puzzle pieces, painted by soldiers suffering from PTSD, lay ready to be assembled by Vienna Arts Society volunteers into a giant collaborative work, on exhibit at the Vienna Arts Center. This is the second year VAS has produced the “Healing Wall” puzzle project. Photo courtesy of Vienna Arts Society

Art, says Vienna Arts Society (VAS) artist Shari MacFarlane, is very healing. The process of creating art from experiences is healing. MacFarlane knows this from personal experience and her background is a strong motivator for her volunteer work with “soldiers on the mend” at Fort Belvoir Community Hospital. MacFarlane is one of a dozen VAS artists making visits to the hospital, coaxing the patients there suffering from Post-Traumatic Stress Disorder to translate their feelings into a visual expression on puzzle pieces. These individual pieces, all fitting together, unified, became the “Healing Wall” puzzle.

On Saturday, July 11, from 4 to 6 p.m.the Vienna Arts Society hosted a reception at the Vienna Art Center with the completed puzzle on display, honoring the soldiers who participated. The original puzzle, from 2014, will be exhibited, as well.

“Each piece makes a powerful statement [on its own], and yet, is part of a much larger collaborative work,” said public relations liaison Dore’ Skidmore.

MacFarlane’s father, a World War II veteran suffered from PTSD although the condition was not identified as such in that era. It was only years later that MacFarlane interpreted her father’s moodiness and outbursts to the traumatic stress he experienced after coming home from the war. He died at age 60.

“Sometimes, the soldiers came in with blank faces, blank eyes,” said MacFarlane. “You coax them a little, and, after a while, you’d see this sparkle in their eyes.”

MacFarlane said that one female soldier told her, “I had no idea I could do this.”

TWENTY-FOUR SOLDIERS created puzzle pieces, some creating more than one piece. Their pieces, and those of the volunteer artists, were assembled into a single larger work.

“One soldier did something that looked like a cross,” said volunteer artist Grace Rooney. “I asked, is that a cross? He said, it could be. I asked if he wanted to add things around it. No, he said. ‘I want it to be so that you can visualize what is around it.’

“Everyone has his own story but when you put the pieces together, it becomes ‘whole,’” Rooney said.

More than a year ago, Vienna Art Center director Lu Cousins learned of the opportunity to partner with the Fort Belvoir Community Hospital, reaching out to soldiers on the mend. It was serendipitous that at that same time, VAS was planning on producing a large collaborative puzzle project made of 12-inch puzzle pieces for its upcoming July exhibit. The original three volunteers, Terry Svat (an Art Therapist), Shari MacFarlane and Dore' Skidmore, brought the puzzle pieces to the troops at the hospital, inviting anyone with PTSD to express themselves. VAS supplied, not only the artists, but all the materials necessary. The end result in 2014 was the first “Healing Wall” puzzle.

Throughout the year, VAS volunteer artists continued to bring puzzle pieces to the hospital, lending artistic guidance and emotional support. There is a plan in the works to make the puzzles part of a permanent collection at the hospital.

“Sometimes, you wonder what the painting means,” said Rooney. “They are telling you a personal story.”

THE OPENING RECEPTION for the “Healing Wall” is on Saturday, July 11, 4 to 6 p.m. Light refreshments are offered, and, there is opportunity for social time with hospital staff and artist-volunteers.

To learn more about the Vienna Arts Society and its classes and community outreach programs, go to www.viennaartssociety.org. The Vienna Art Center is located at 115 Pleasant Street NW, around the corner from Maple Avenue.