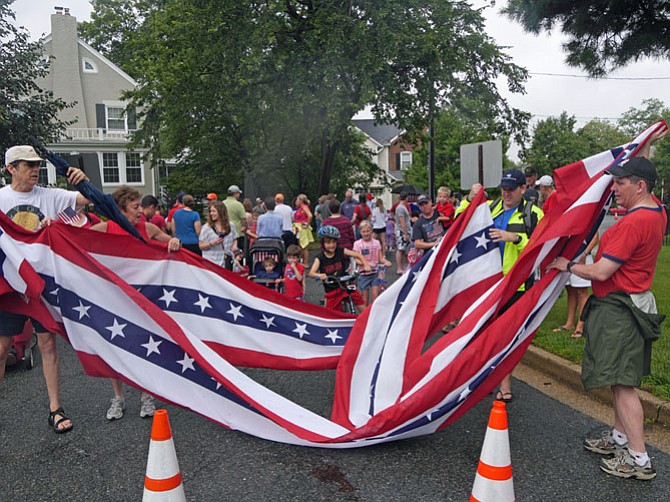 Doug and Lynne Ross and John Armstrong unfurl the street-wide flag that will signal to the red, white and blue sea of children that the Lyon Village Fourth of July parade is about to begin. Photo by Shirley Ruhe 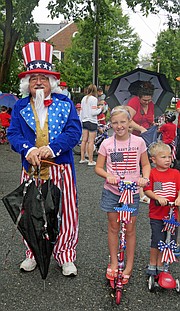 Syd Levin in an Uncle Sam costume rallies the Lyon Village paraders who are taking advantage of a break in the rain to march in the annual Fourth of July Parade. Lori Williams with brother Ryan line up their scooters, decorated with matching bows and stars. They are waiting for Uncle Sam’s signal to begin the ride to Lyon Village Park. 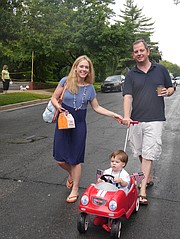 Jason and Kathryne Licht bring up the end of the Lyon Village parade route as they push Matthew in his red car down Key Bouelvard. 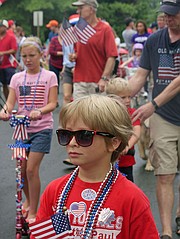 Scooters, wagons and bikes (and Captain Marvel on his motorcycle) crowd the street in a blur of stars, stripes and bright red T-shirts.

It had been raining hard all morning. At 10:15 a.m. a Lyon Village e-mail bulletin went out: "July 4 Parade is On!" It read, "Uncle Sam is on our side but Mother Nature is not our friend today. However, we will have the parade as it looks like there may be a window at 11 a.m. Please bring your decorated bikes, scooters, vintage cars and motorcycles (and umbrellas) to 17th and Highland at 10:45 for the 11 a.m. parade. Kids should feel free to wear bathing suits.”

The Arlington police lined up yellow cones at the beginning of the parade route. Two fire engines stood by on the adjoining street to meld into the parade.

Caroline Holt decked out in blue and white shirt, faded red Nats hat and pink boots, has been organizing the neighborhood parade for the last eight years. She says the parade "has been going on since before I was born. Usually it lines up way down there," she said, pointing to the block behind her. But this year the weather interfered. Holt made the decision to go ahead with the parade. "We all live within a couple of blocks so why not." Although the picnic with traditional food sales and decorations won't go on this year, "we'll repurpose the cake walk, you know make lemonade." The neighbor on the corner says that the man across the street used to be a lobbyist for the cattle association. So he had a big industrial grill that was usually used to cook the hot dogs. Holt says the proceeds of the day's event will go toward the renovation of the Community House.

The antique cars lined up at the beginning of the parade. Dick Sullivan said, "I am driving that green ‘27 Model T." Captain Marvel revs up his motorcycle. Doug and Lynne Ross with John Armstrong unfurl the street-wide flag that will signal the beginning of the parade. "Is that long enough?" Armstrong called across the street. Syd Levin, inside the Uncle Sam costume, has put his large black umbrella away. His grandchildren live in the neighborhood. Lori Williams and her brother Ryan line up their scooters beside Uncle Sam awaiting his signal to weave their way through the crowd to Lyon Village Park. A wagon crowded with three cousins is decorated with red, white and blue stars.

A young girl rides on her father's shoulders, her mother sporting a tall Uncle Sam hat and a tiny baby strapped to her chest while Jason and Kathryne Licht push Matthew's red car down the street, clutching a bag of Dunkin' Donuts. A golden retriever has joined the paraders and a boy dressed in flag shorts bounces a ball down Key Boulevard. The sun has come out as the parade disappears down the four- block parade route. A late arrival scurries down the block to catch up with the tail end of the parade in the distance. All the children carry small American flags — on to the games and Gatorade between the raindrops.