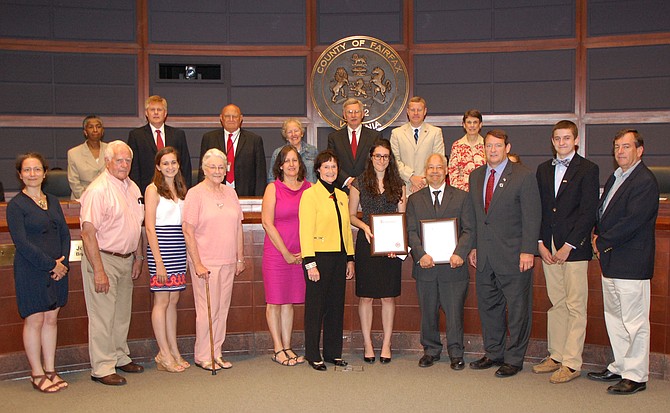 George Mason University Professor of Biology Dr. Emanuel Petricoin cited Temple Douglas' work as inspiration for a new way to test for Lyme disease. Both were honored at the Board of Supervisors in June. Photo contributed

As a Thomas Jefferson High School student in 2010, Temple Douglas recognized the possibility for a better Lyme Disease test. Several members of her family had Lyme disease and “I recognized the need,” she said.

“I’ve now graduated from college,” Douglas told the Board of Supervisors on Tuesday, June 23, “so in the five years it’s gone from an idea to a research project to a clinical trial and now it’s available commercially.”

The test, which has achieved close to a 100 percent sensitivity for early stage Lyme Disease detection according to Supervisor Pat Herrity, has already been performed on numerous patients in Northern Virginia.

“This truly could be a game changer in the battle against Lyme Disease,” said Herrity. “With the short window you have to identify Lyme Disease, to have reliable information as soon as possible is critical.”

The Board of Supervisors gave Thomas Jefferson High School student Temple Douglas recognition in 2010 for her efforts to develop a better Lyme disease test.

“I’m really excited about this proclamation today for two reasons,” said Herrity. “It is a great success story for Fairfax County, its school system and the healthcare industry and it represents a significant step forward in the fight against Lyme disease.”

Because blood based tests had to wait for antibodies to be present to detect the disease, Douglas "hypothesized that a urine-based test would highlight the bacteria itself, instead of the body's response to it could prove more accurate," said Herrity.

George Mason announced in late April that Petricoin's team at the University Center for Applied Proteomics and Molecular Medicine along with a local Virginia company called Ceres Nanosciences exposed a new way to test for the disease that uses a patient's urine.

Lyme Disease is the sixth quickest growing disease in the United States, according to the United States Centers for Disease Control, and has affected hundreds of families in Fairfax County.

"Early detection of the disease is critical," said Herrity. "If not detected early, it can have devastating effects including achy joints, fatigue, Bell's palsy and even stroke."