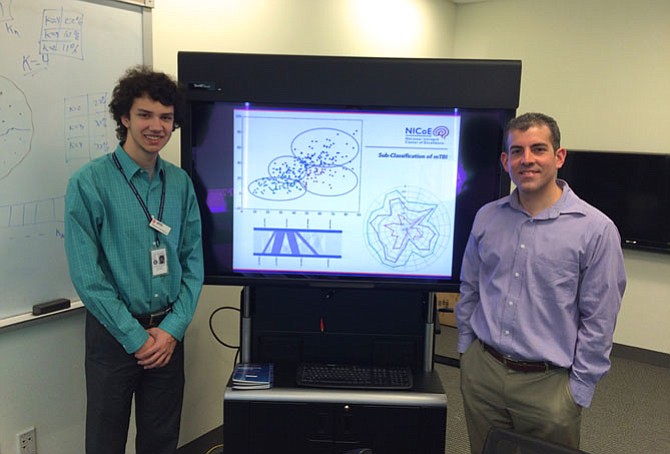 Eduard Danalache, senior at TJHSST, and Dr. Jesus Caban, chief of Clinical and Research Informatics at the National Intrepid Center of Excellence, at work on a project dealing with mild-traumatic-brain-injury clustering. Photo courtesy of Eduard Danalache

Referred to as the nation’s oldest and most prestigious science and math competition, the Intel Science Talent Search (Intel STS), a program of Society for Science and the Public, has granted prize money to some of today’s leading thinkers and scientists, and two Fairfax County Public School (FCPS) students from Vienna are among just 300 high school seniors selected to move on to the semifinalist stage of the competition.

Danalache’s project dealt with categorizing mild traumatic brain injuries (mild TBI). Because mild TBI is a broad diagnosis, Danalache was prompted to investigate ways to divide the categories of mild TBI, even further.

“There is lots of confusion surrounding the topic of traumatic brain injury,” said Danalache. “So I started to talk to one of the doctors about investigating it.” The title of his research is “A Cluster-Based Approach to Determine Subcategories of Mild Traumatic Brain Injury.”

Previously, Danalache interned at the Bethesda-based National Intrepid Center of Excellence (NICoE), a Department of Defense Institute that researches damage caused by traumatic brain injury and psychological health conditions, in the lab of Dr. Jesus Caban.

In the summer of 2014, Danalache returned to Dr. Caban’s lab to do research on mild TBI. His research resulted in four subcategories, or clusters, that deal with the levels of severity in the different brain injuries found in different patients.

“I think it will have a significant impact in the scientific community treating people with concussions,” said Caban. Currently, mild TBI accounts for over 80 percent of traumatic brain injury diagnoses.

Michael Qu, a senior at Oakton High School was a semifinalist in the Intel Science Talent Search competition as well for his project, A Study of Global Warming and Its Impacts on Food Security in the Continental United States.

“I started after doing a summer internship at George Mason University,” said Qu. “The following summer I returned to Mason to continue with the research.” Qu also worked intermittently throughout the year, analyzing trends among data sets that Mason had unique access to. The biggest challenge with projects like this is that students are using skills not necessarily taught in the classroom. It takes their own initiative in order to do well. For Qu, he became involved with this research because he wanted to learn more.

“My biggest challenge working on this project is that everything was completely new. It’s not taught how to conduct research. In school they mostly teach you information and formulas. But when you get into research, it’s all different.” After graduating, Qu will attend Columbia University in New York City where he plans to expand his research interests. As semifinalists, both Qu and Danalache were awarded $1,000 in prize money from the Intel Foundation, and an additional $1,000 was also awarded to their schools.