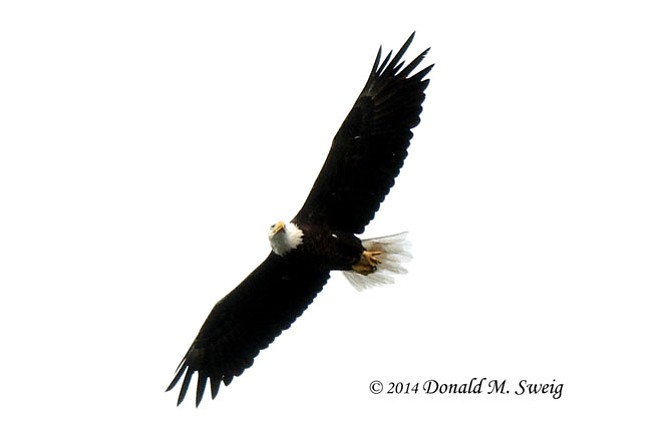 A Bald Eagle in flight over the Potomac River. The eagles have rebuilt their nest in Great Falls. Photo by Donald Sweig

The current pair of adult Bald Eagles at Great Falls have rebuilt their nest, which fell or blew down last spring.

For at least 20 years, Bald Eagles, although surely not the same two birds, have been nesting on Conn Island, which is the large tree-covered island in the middle of the Potomac just above the cofferdam, up river from the Great Falls themselves.

The original nest was in a large sycamore tree on the northern or Maryland side of Conn Island, and was best seen from the river trail on the Maryland side of the Great Falls Park. Bald Eagles tend to use the same nest year after year, adding more sticks and branches each year until the nest can become quite large, as much as 8-feet in diameter, up to 10-12-feet deep, and weighing well over 1,000 pounds. About six years or so ago, one of the supporting limbs of the original nest tree broke, and the nest collapsed to the ground and into the Potomac.

Obligingly, the eagles soon build another nest, but this time on the southern end of Conn Island where it was easily viewable from both sides of the river. The eagles successfully raised and fledged one-to-three chicks from this nest each year for about four years. That nest was destroyed in the great Derecho windstorm, on June 29, 2012.

Very soon after, the eagles built yet another nest in a large tree, very close to the sycamore nest tree. That nest, which fledged three young eagles in 2014, was also blown down by a strong wind storm in the late Spring 2014.

For two or three months no new nest building was seen, and it was feared that the eagles had gone elsewhere. Then, in early November 2014, they were seen constructing a new nest higher up in the same tree from which the former nest had been blown down.

This newest nest is easily seen from both sides of the river; it can be seen from the concrete water-intake-platform or from the river trail on the Maryland side near the Tavern at Great Fall in the C&O National Historical Park, or from the Potomac shoreline on the Virginia side in Great Falls National Park. The nest can be seen with the naked eye, although a pair of binoculars or a spotting telescope gives a much better view.

A Bald Eagle sits in the newly reconstructed nest on an island in the Potomac River, visible from Great Falls National Park.

Bald Eagles, in the mid-Atlantic/Chesapeake region usually mate and lay eggs in mid-February. They incubate the eggs for about a month (34 to 36 days) before the chicks hatch, and then it takes about 10 to 12 weeks before the young, juvenile eagles are ready to fledge and leave the nest.

In late January or especially early February the adult eagles can sometimes be seeing mating on a branch or snag near the nest. Soon after, one may see a white head slightly sticking above the edge of the nest as the eagles incubate their eggs.

When first hatched, the young eagle chicks will be too small to see in the nest; by late April or early May the chicks may be large enough to be seen with a pair of binoculars or the little telescope. By June the juvenile birds are nearly fully grown and can be seen walking and bounding around in the nest, and flapping their wings, although at this point they're still being fed by their parents. By mid to late June they should be fledged and have left the nest.

Young Bald Eagles are almost entirely brown when they first leave the nest; by the end of the first and during second year they begin to get some transient white on the body or under the wings. Late in their third year, and during their fourth year they become sexually mature and get the white heads and tails that are so characteristic and charismatic of our National Bird.

If you would like to see the new nest and, hopefully, eventually the young chicks in the nest, the regular weekly bird walk, which meets Sunday mornings at 8 a.m. in the first parking lot of the Great Falls National Park on the Virginia side, always finishes up-river and has a look at the nest. All are welcome. Or, take some binoculars and have a look for yourself from either side of the river. Although there are other Bald Eagle nests along the Potomac River, the nest at Great Falls is the easiest to locate and get access to see. You might even see an eagle flying or soaring over the river, the nest, or over either of the Great Falls parks. Bald eagles are a very special bird, they're always fun to see. Come on out and have a look.