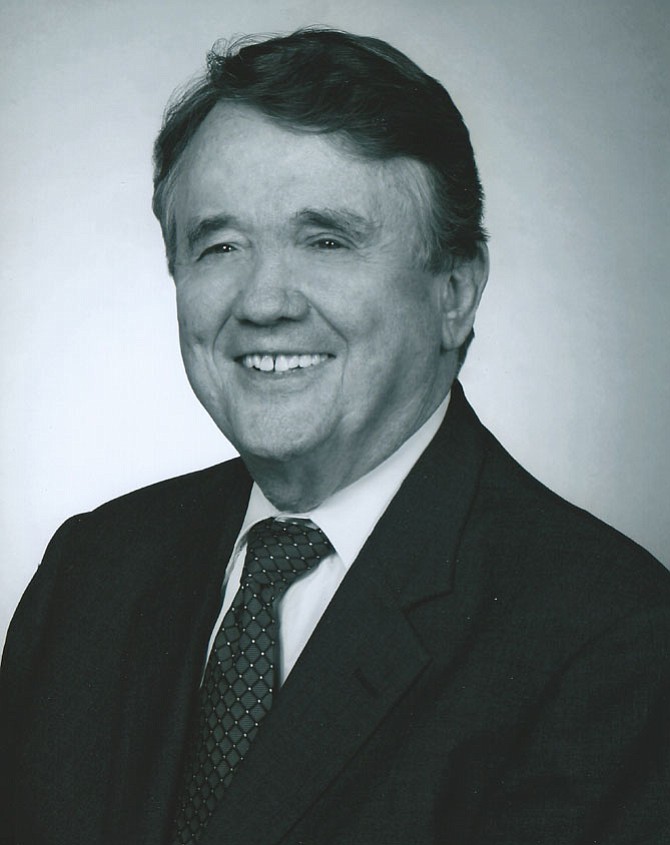 Former Mount Vernon Supervisor and U.S. Rep. Herbert Harris died at his home in Mount Vernon on Dec. 24, 2014. He was 88 years old.

Harris was born in Kansas City, Mo. He attended Missouri Valley College and Notre Dame University. He then served in the U.S. Navy before earning his B.A. degree from Rockhurst University in 1948. He went on to earn his J.D. Degree from Georgetown University Law School in 1951. Following graduation he worked as a Washington, D.C. consultant in international trade and agriculture, and founded the consulting firm, Warner & Harris. From 1955-1970 he represented the American Farm Bureau Federation before federal agencies and Congress. He also became involved in civic affairs and local politics and was first elected as Mount Vernon district supervisor in 1968. After twice being elected supervisor, he then ran successfully for U.S. Congress where he served for three consecutive terms before being defeated in a close race and lost by only 1 per cent. He then returned to his specialty in international trade law with the firm he founded, Harris, Ellsworth, and Levin.

Friends, family, and political associates all refer to Harris’ energy, breadth of interests, and dedicated approach to his political responsibilities that earned him repeat electoral victories as Mount Vernon supervisor and as a three-term U.S. representative. At the local level among his accomplishments he played a major role in bringing the Mount Vernon Hospital to the area, and extending the metro rail system to serve the Lee and Mount Vernon districts.

At the Congressional level among his many legislative projects he co- authored the Stark-Harris legislation to provide $1.9 billion to assure the completion of the 100-mile metro rail system, initiated the construction of the bike path on the Mount Vernon Parkway along the Potomac River that extends from Alexandria city to the Mount Vernon estate, and as chairman of the District of Columbia Congressional subcommittee on Human Resources was a strong advocate for federal worker pay and benefits comparable to the private sector.

Davis said: “Prior to being elected to Congress, Herb served as a member of the Board of Supervisors and vice chair of the Washington, D.C. Metro Transit Authority. When he entered Congress he was instrumental in securing the needed funding for construction of metro. The metro system as it exists today would not be there but for Herb Harris. He was a leader in getting the money for that area … and bringing the region together to address the problems with building this mighty system.”

Moran said: “He did more things for Fairfax County and, in many ways, for the nation than we will ever know. He was instrumental in getting funding for a new hospital and expanding the libraries in the Mount Vernon area and in Fairfax county. The metro transit system is critical to the entire metro Washington area. In the early days it was a very controversial, very political issue, to bring metro out to the suburbs and to pay the costs. You had to have a vision, and Herb had that vision. In so many areas, we find today that he was even more correct than we understood at the time in terms of meeting those transportation needs.”

In addition to commenting on Harris’ numerous accomplishments in transportation, working to save Mount Vernon Hospital, and efforts to improve wages and benefits for federal civilian and military employees, Supervisor Gerry Hyland added: “His Irish charm and wit, his infectious and almost devilish smile made him a delight to be with and enhanced his ability to represent his Mount Vernon constituents so well as supervisor and congressman. Herb Harris was an extraordinary public servant who changed people’s lives for the better.”

A review of his biography includes special emphasis he placed on transportation projects affecting the region at a critical transition time for the development of the region. But his accomplishments in other areas demonstrated his commitment to constituent interests. For example he worked to expand and protect the historical site of Manassas National Battlefield Park, established the Quantico National Veterans Cemetery, blocked a proposed D.C. commuter tax, completed the Four Mile Run flood control project, and restored U.S. citizenship to Confederate General Robert E. Lee.

Harris’ drive and ambition to get things done was coupled with a view toward the future needs of his community and the region. One example of his vision was demonstrated back in 1975 when he met with Groveton (now West Potomac) high school students who asked him about his thoughts for the future of the area. As recorded in the book, “Snake Hill to Spring Bank: An Oral History, Volume 1,” Harris said: “I stood at the head of the Harrelson tract and said that some time in the future you could have a community center here. When I say community center I just mean a sort of focus of activity, a place that says, ‘hey, this is ours, the center of town.’ I think we have moved quite a ways along on that. The regional library is now there, the hospital is three fourths there, the mental health center is there. We have our new rescue station there. Between that and the hospital there should be a government center. This can start giving some focus, a place where people can go for government things, where they can meet and so forth.”

Forty years later the facilities and services Harris spoke about are now all in place in the Mount Vernon community. His vision for a community is still evolving and being debated; most recently to establish a Mount Vernon Town Center recommended by local citizens in the Supervisor Gerald Hyland Visioning Task Force report.

Harris’ daughter, Susan Hept, was asked what she thought he would like to be remembered for. She responded “that he made a difference.” Furthermore, she said that he would like to be remembered as “a great family man, and loved having his family around him.” Hept characterized her father’s no nonsense, full-steam ahead approach to his public responsibilities, and who he was as a father and person: “He was always trying to do what needed to be done to make life better. He taught us all that, if you see something that needs to be changed for the better, get out there and do something about it.”

Services were held at Good Shepherd Catholic Church on Jan. 5. Interment was followed at Quantico National Veterans Cemetery, with military honors. In lieu of flowers, donations may be sent to the Alzheimers Association.