New schools and boundary changes in the works in Arlington Public Schools. 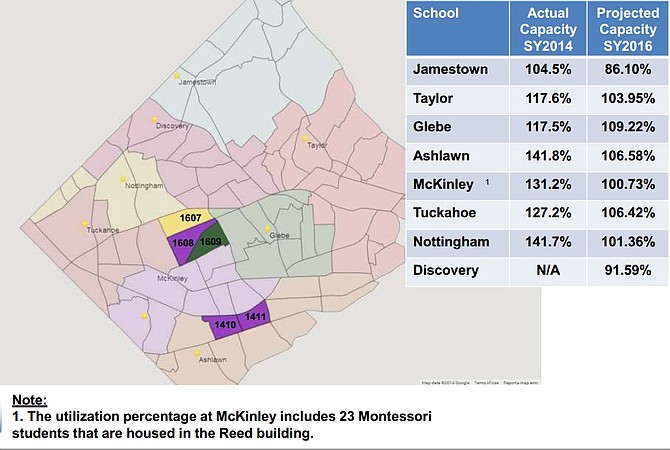 While the rest of county moves into the new year, Arlington County Schools are finding themselves in the middle of a challenging one. Arlington schools have faced a 21 percent increase in student population over the last five years and anticipate a 19 percent increase over the next five. This has put a strain on school resources, and consequently has forced the schools to ask for budget increases. Meanwhile, the schools have begun plans to shift school boundaries to spread the student population as evenly as possible.

“Unlike the county, we run on the school year cycle,” said School Board Chairman James Lander. “My priorities haven’t changed; we’re focus on instruction, capacity, and … the budget.”

In the initial estimates coordinated with the Arlington Office of Management and Budget, the county estimated a $20 million gap in funding to the schools.

“We’re working together,” said Hynes. “They’re facing unprecedented growth, which means they need more money for growth. We’re doing the best to meet those needs without writing blank checks. There’s going to be a thoughtful budget process on both sides.”

“We have a record of fulfilling the school’s funding requests and then some,” said J. Walter Tejada, vice chairman of the Arlington County Board. “A study group will be looking at the conversation on how we deal with [increases in school population]. We need to find a way to continue to meet those needs.”

At the beginning of school in 2010, Arlington Public Schools had 10,440 K-12 students. By the beginning of the 2014-2015 school year, that number has risen to 13,393 students. Arlington Public Schools have taken a number of steps to accommodate the increase in student populations, including the opening of the new Discovery Elementary School and the construction of a new school at the “Wilson site.”

“I think that, halfway through [the year], we’ve made some strong statements and some good decisions,” said Lander. “We have, as a board, voted to support construction at the Wilson school site and we have capped that at $80 million. We are looking to retrieve some bond capacity for future projects for secondary sites.”

At a meeting on Jan. 5, a work session on elementary boundary refinements met to improve enrollment balance in the schools. The primary topic was addressing the disparity between North Arlington’s over and under-populated schools. At the current boundaries of the schools, McKinley Elementary School is projected to be 148 students under its maximum capacity in 2016 while Ashlawn Elementary is projected to be 105 students over capacity, expected to rise to 191 students by 2018.

The School Board have a number of tools at its disposal to mitigate the effects of school overcrowding. The schools can install “relocatables,” a type of temporary classroom. They can relocate programs, but this is typically only used for pre-kindergarten ages. One of the biggest steps the School Board can make to balance enrollment is to change the school boundaries. School zones are broken up into planning units, areas that are theoretically composed of approximately 50 students. When the School Board redraws the boundary lines, planning units assigned to one school are relocated to a neighboring school.

“We analyze, twice a year, the enrollment projections and have a look at what that means,” said John Chadwick, assistant superintendent for facilities and operations. “We want to use resources as efficiently as we can.”

Five planning units were selected by the Superintendent’s Office to change schools, a change that would take effect in the 2015-2016 school year if approved by the School Board. One of the main concerns Chadwick said he heard from the community was the desire to keep neighboring planning units 1607 and 1608 going to the same school system. Some of the plans considered by the staff kept the two units together, but the final superintendent’s recommendation was to split the two units to improve enrollment balance. In the new plan, the 56 students in unit 1607 will be included in the Nottingham Elementary School boundary while 93 students in unit 1608 will be reassigned to McKinley Elementary School. Jamestown Elementary School will face the largest student population increase. Jamestown, which currently has 529 at 88.61 percent capacity, would increase to 581 students at 97 percent capacity.

Kelly King, on behalf of the Facilities Advisory Council, expressed support for the superintendent’s recommendation.

“This plan allows for unforeseen and unknown growth at the schools,” said King. “We understand the challenges presented with this option, including families that change schools … We discussed options that kept units together, but it’s not feasible.”

However, King expressed concerns regarding the planning unit structure.

“We need to revisit planning units as a whole,” said King. “We’d like to explore options that better fit current and future needs of the Arlington public schools and the community… It’s time to take a look at this, especially when we will soon need to look at the Middle School boundaries.”

The new plan faced some criticism from the School Board at the work session. Many on the School Board felt that the changes to the school boundaries were done without consideration of the impact on the lives of the students.

“There’s a sense in the community of kids who are in special education programs that they’re the last to know and the first to be moved,” said School Board member Nancy Van Doren. “It’s done without any sense of effect on them. I don’t think there’s any way around some of this, but the way we do this and the way we treat those families with respect and courtesy should be consistent …. This is something we need to talk to people about, but if you constantly talk to them like second class citizens at the end of the process, that creates ill will.”

“For many parents, this is concerning,” agreed Dr. Emma Violand-Sánchez, School Board vice chair. “They don’t like surprises.”

King proposed, in the near future, either reviewing the current boundaries of the planning units to more accurately reflect the student populations or looking into alternative methods of assigning student populations. The newest School Board member, Barbara Kanninen, expressed concerns that the boundary changes were a temporary measure.

“I get concerned when, in less than two years, things have changed so much that we need to shuffle these things around,” said Kanninen. “It gets me thinking that now, in two more years, we may have to do this again.”

Lionel White, director of facilities planning, said the best the Superintendent’s Office had to work with were the current planning units and the current projections for student population.

“Working with projections is like driving a car forward and looking in the rear view mirror,” said White. “Right now, the historical data is the best projection we have for the future.”

At the next meeting of the Arlington School Board on Thursday, Jan. 8, the boundary changes will be discussed again. On Jan. 15, at 7:30 in the Arlington Education Center Board Room, the School Board will host a public hearing on the topic. The final decision will be announced by the Jan. 26 Kindergarten Information Night.