Homeowners to face rise in property taxes through higher assessments.

According to Arlington County Manager Barbara Donnellan, there are no new surprises in the the fiscal year 2016 budget. There is no growth or new programs. But beneath the surface there are several notable changes that could have a sizable impact on the lives of many Arlingtonians.

In the fall of 2014, Donnellan’s staff projected a $4 million funding gap. According to Donnellan, the healthcare and retirement costs were sufficient to close the gap the county had predicted in the fall. Donnellan noted that any remaining funds saved from the healthcare and retirement savings were invested into key programs that had previously been funded with one-time funds. 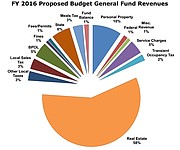 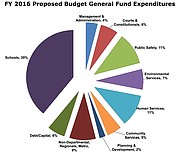 The schools, however, did not have the same windfall. While the schools, which had projected a $24 million gap, have whittled the number down to a $13.6 million gap. Arlington County Board and the public school system have had a revenue sharing agreement since 2001, meaning that Arlington Public Schools directly receive a percentage of the total tax revenue. Since 2012, Arlington schools have received 46 percent of the total tax revenue, and this year funding to the schools is projected to increase from $432.2 to $445.5 million, a 3.1 percent increase over last year’s budget.

Donnellan said that her office still needed to work with the school superintendent, who proposed his own budget on Feb. 19.

“In a year like this, we probably wouldn’t raise taxes,” said Donnellan, “but we have to consider the school needs.”

If the council decided to assign additional funding to programs, like the schools, or cut tax rates, the County Manager’s office prepared additional cut options. Donnellan laid out $4 million on potential cuts the board would be able to make if asked.

The first category of potential budget reductions would be certain efficiencies and realignments, totaling to $1.4 million. This could mean merging similar school and park after-school programs, converting a metrobus service line into Arlington Transit service.

For more drastic reductions, Donnellan laid out potential cuts to local services, including the long-discussed closure of the fiscally challenged Artisphere. Donnellan said some of that program’s funding would be reinvested into Arlington’s Cultural Affairs program. The $2.4 million reduction in Arlington County services could also mean cuts to the bike/pedestrian program and employment services. These cuts could also impact the community energy program, a plan adopted in 2013 to push for greener energy programs throughout the county.

While the proposed budget keeps the base real estate tax rate at the current level, for the average Arlington homeowner, the tax and fee burden will increase from $7,286 to $7,567. This means it is $281 more expensive in annual taxes to own a home in FY 2016 than it was in 2015. According to the Arlington County Budget, this reflects a 4.9 percent increase in the average monthly residential property assessment and a 1.7 percent increase in the water-sewer rate due to inflation and additional personnel and maintenance costs. According to Donnellan, local taxes other than real estate tax are expected to remain relatively flat, with only a 0.6 percent aggregate decrease.

The budget includes employee compensation steps. Most qualifying employees will receive an average pay increase of 3.35 percent. Donnellan noted that each step or pay increase was based on merit and performance.

While she expressed her office’s belief that there would not be a real estate tax rate increase over FY 2015’s $0.983 per $100 of assessed value, Donnellan suggested that the County Board approve advertisement of an increase to $0.996 as a precautionary measure. The advertised tax rate would be the maximum rate that the county may adopt.

At its Feb. 21 meeting, the County Board voted unanimously to approve advertising the suggested tax and fee levels, though some did so unhappily.

“This is the outer limit of what we could do,” said County Board member John Vihstadt. “It’s not necessarily what we will do, and from my perspective it’s not what we should do. I’d like our end point to be no increase in the property tax rate. It’s important to point out that even if we hold the line on the rate, taxpayer costs will still escalate. They’ve escalated year after year from rising assessments … We need to make difficult choices now.”