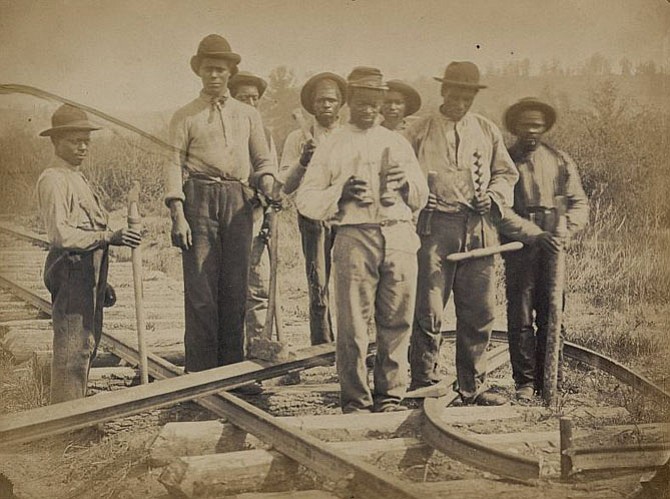 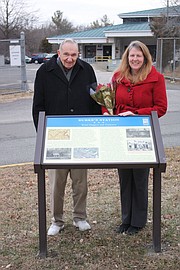 Centreville resident Debbie Robison hasn’t chopped a cord of lumber or laid a railroad trestle. But for more than a year she’s done hard labor at the National Archives and Records Administration, researching Civil War-era railroad workers in Northern Virginia.

Patrick Lennon of Visit Fairfax approached the Fairfax County History Commission in 2011 with the idea of participating in the state sesquicentennial remembrance of the Civil War. Several years into their participation, Robison, a history commissioner representing the Sully district, thought it would be a good idea to create a historical marker honoring the contributions of African-Americans to the war.

She knew she wanted to do a marker on African-Americans who worked on the railroads, a major asset to the military supply chain, but needed to find out more about what occurred in different locations around the state.

The Orange & Alexandria Railroad, built in 1851, facilitated the development of towns along its path including Clifton, Fairfax and Burke Station.

“It is important to note the many nameless African-American heroes who protected our land and heritage -- without them, the Orange & Alexandria Railroad would not have been able to contribute to the success of the Federal troops,” said Lynne Garvey-Hodge with the Fairfax County History Commission.

“They would not have been supported by the Overland campaign which included 6,000 head of cattle sent weekly (1,200 daily Friday through Tuesday) from Alexandria to Brandy Station to feed the Union troops on 300 cattle cars,” Garvey-Hodge continued. “The entire operation required the constant employment of 300-plus men and many, many more wood choppers to support the fuel needs of the railroad.”

ROBISON WENT to the National Archives and poured over U.S. military railroad records and newspaper records from the period. What she teased out was the story of a group of African-Americans, freed and “contraband” former slaves working in Burke Station as woodcutters.

The Burke Station area was heavily wooded in the mid-19th century, and the cords of lumber these men cut and removed went into railroad ties for Union trains moving troops and supplies, and rebuilding bridges that Confederate soldiers made a habit of torching.

“What struck me was the fact that these men, who had escaped slavery, were working outside protected Union lines,” said Robison. “Many were captured and sent back South. They weren’t always protected and risked being captured.”

“It was a very personal war,” said Jon Vrana, president of the Burke Historical Society. “They were really fighting for their lives and independence.”

The marker Robison helped create, now standing in the ground in front of the Burke Volunteer Fire & Rescue Department, tells this story and recounts a specific incident on Oct. 28, 1863 at Burke Station.

“Confederate raiders had captured many contraband workers,” said Robison, “a wagon master, a handful of mules. One of the contrabands escaped and went and warned the Union garrison. He was able to alert people they were captured.”

The Confederate captors had been marching their prisoners toward the station guard when the garrison, forewarned by the man who escaped, fired a volley at them. The raiders fled, leaving the woodcutters free and unharmed.

THE MARKER was unveiled at a ceremony on Saturday, Feb. 14 at the community center in the Burke Volunteer Fire & Rescue Department. The Mt. Zion Gospel Men’s Choir added a musical flair to the event.

“It was a good celebration of community, the fire department and historical society, coming together to honor people that really risked their lives,” said Supervisor Pat Herrity (R-Springfield). “These are good examples of people that are true heroes.”

“The marker is really serving as a reminder to people of the past events that were occurring in the Burke area,” Robison said, “not just shopping centers.”