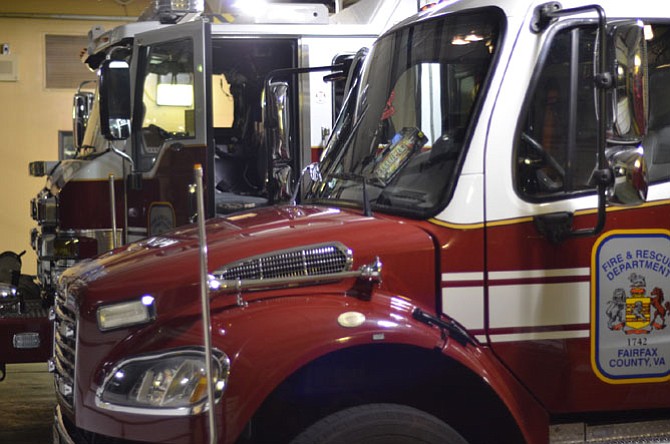 The vehicles and equipment have long had a tight fit at Herndon Station #4. Steps are now underway for a renovation process for a new facility to replace the building on Spring Street in Herndon. Completion is expected in summer 2016. Photo by Ryan Dunn.

After years of inquiry and study, preparations have been made to close the building of fire station Herndon Station #4. The Horn Motor's lot on Locust Street, at the intersection of Center Street in Herndon will host a temporary fire station. The land is leased by Fairfax County, and is part of a renovation process for a new facility that will replace the station on Spring Street. Attending a flag lowering ceremony the evening of Tuesday, Feb. 3 were Herndon Mayor Lisa Merkel, and town council members Sheila Olem, Jennifer Baker and Grace Wolf. 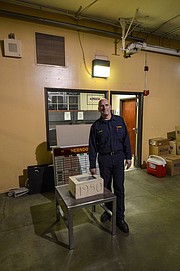 Herndon Fire Captain Wally Johnson at Hendon Station #4 with the Herndon Station #4 cornerstone. A ceremony for the closing of the fire station was held on Feb. 3.

“It was a moving, bittersweet ceremony ending our last night here,” said Fire Captain Wally Johnson. “We had a real good turnout with representatives of both Herndon and Fairfax County, we are looking forward to our future at the new station.” The old station has been recognized repeatedly for its historic years of service, and it was debated whether the new station should be built. The temporary facility for the Herndon Fire Station should provide seamless fire and rescue services in Herndon during the construction of the new station.

Also attending the evening ceremony were Fairfax County Fire Chief Richard R. Bowers Jr. and Howard Nachman who has long worked with the Herndon volunteer fire department and served as president of Herndon Volunteer Fire Department. Second generation firefighter, technician Jeff Tincher was also present for the ceremony. “I was hoping this day would not come, but now it has,” said Tincher. Many of the firefighters stationed at the Herndon station have appreciated the old building, yet recognize with changing times a new facility to allow the firefighters to house more units and equipment is necessary. “I started out of rookie school at this station and have grown attached to it,” said firefighter Sidney Boyd.

THE NEW FIRE STATION will be approximately 14,500 square feet and two stories, and will include larger women’s facilities, decontamination facilities, meet all Americans with Disabilities Act standards and will contain fitness facilities for the firefighters. Fire stations are located within the county in relation to other station, with a seven-minute response time for emergencies to 95 percent of the county’s population. There are 38 Fire and Rescue Stations in Fairfax County.

A devastating fire in downtown Herndon in 1917 provided the impetus to create the fire department, and the station was officially recognized in 1929, after a dozen years of fundraising. In 1920, the first fire chief was appointed and the Town Council and the citizens association donated the first fire truck, a Model T, to the fire department. Where the Town Hall now stands, a Fireman’s Carnival took place to raise money to pay for the station’s construction. The Herndon Volunteer Fire Department was chartered on Oct. 7, 1929, and a new fire station was built next to the Murphy and Ames Lumber Yard behind the train depot. The Model T had been rebuilt to hold a hose.

Captain Wally Johnson has served as firefighter for 26 years, and for five years at Herndon Station #4. “The biggest memory for this station is that you feel you are part of history when you work here,” said Johnson. “The location and design give you a great feeling of service to the community.” In 1976, the fire department handed control over to the county. Although the station was incorporated into Fairfax County, the volunteers remained active in the community, conducting fundraisers for Station 4 and participating in many other community events.

COUNTY STAFF has worked closely with the Town of Herndon in planning for the station site. When the construction of the new fire station is complete, the temporary site will be restored to its original condition. The old fire pole will be salvaged and displayed as soon as the new station is complete. "Herndon Station #4 has been a mainstay in our downtown for decades, serving as a community gathering spot, and even hosted our council meetings at one time,” said Mayor Merkel. “We appreciate the county working with us to create a new, state of the art facility at the current location in downtown Herndon, and look forward to our continued partnership on this and other projects… We look forward to seeing the construction progress and of course the ribbon-cutting when the new station is complete."