The Town already owned the municipal parking lot and the parking lot parcel containing ArtSpace. But the Elden Street front property, that had been occupied by the Subaru dealership, affected the value of the Town’s land as well as Herndon’s plans for all of the downtown.

“Combined with approximately three acres of land already owned by the town, the purchase clears the way for a comprehensive development project in the downtown, in accordance with the Downtown Master Plan adopted by the Town Council in 2011,” according to County documents.

“People are ready for this,” said Mayor Lisa Merkel.

The Town of Herndon gives residents the opportunity to track progress on the downtown projects on its website www.herndon.va-gov.

Next Step: Request for Proposals

Following the purchase of the Ashwell property which created a contiguous 4.675 acres of Town-owned land in Herndon’s downtown, the Town issued a Request for Proposals (RFP) on Nov. 2, 2015.

The town’s vision for the redevelopment calls for four-story (mixed-use/residential) and three-story (mixed-use/commercial) structures, a jointly-funded public/private parking structure, and an 18,000 square foot arts center, among other features.

Initial proposals are due in February 2016.

According to the RFP, Herndon: “hereby solicits submission of proposals for the redevelopment of 4.675 acres of land in historic downtown Herndon into an attractive, mixed-use development, including a parking structure in which the Town has fee interest to a minimum of 220 spaces. The Town envisions a development of excellent design and quality providing the historic town core with additional vitality while respecting and reflecting the heritage of the downtown,” according to Town documents. “The Town envisions these benefits to be utilized to develop a superb environment for outdoor pedestrian enhancements including outdoor dining and passive and programmed activities. The site also benefits by being within 1.5 miles of the future Silver Line Herndon Metro Station. The Town will have circulator bus service from the downtown to the future Metro station.”

Herndon continues to prepare for the future Metrorail station in Herndon.

“We are so fortunate,” she said. “This is a huge project, one of the biggest infrastructure projects in the country. There aren’t many towns that can get involved in projects like this.”

The Washington Metropolitan Airports Authority recently projected cost of Phase I, the 11.7 mile segment of the Silver Line with five stops, to be $2.982 billion.

Construction is hoped to begin on Herndon’s future Silver Line Stop in 2016, with its opening by 2019-2020, according to a talk Merkel gave in May.

The entire Silver Line will be a 23-mile extension of the existing Metrorail system from East Falls Church, with current stations in Tysons and Reston, and additional stops in Reston, Herndon and eventually to Washington Dulles International Airport west to Ashburn.

The Herndon Town Council approved 38 acres to be set aside for its future Metro stop in February 2012.

“It’s the right space, we could never consider that in any other part in town,” said Merkel.

Merkel called the Silver Line the “economic engine for the next 50 to 100 years.”

Herndon has more than 1,100 businesses and four corporate headquarters in town. Herndon anticipates attracting additional businesses and perhaps a campus or satellite campus in the future.

“We want to make sure we capitalize on this opportunity,” she said.

Del. Tom Rust (R-86) improved life for Herndon, and for Virginia, say many.

“He is one of the pivotal figures in the history of Herndon,” said Eileen Curtis, Dulles Regional Chamber of Commerce.

Right after she was elected mayor, Lisa Merkel invited Rust to lunch.

“I said, ‘How do you get things done?’ He said, ‘You have a vision and you stick with it and you keep pressing ahead,’” Merkel said. “It was a great lunch.”

Dranesville Supervisor John Foust has represented the Herndon area of Fairfax County on the Board of Supervisors while Rust represented the Town in the House of Delegates. The two served together on the Northern Virginia Transportation Commission.

“I observed him take many political courageous positions,” said Foust.

Foust calls Rust “a gentleman” and a “dedicated and successful public servant.”

“He made life better for Herndon residents and all of us who live in the Commonwealth,” said Foust.

Eileen Curtis, president of Dulles Regional Chamber of Commerce, said Rust gave his life to public service for Herndon. “He really does play into the history of the Town,” she said.

Rust, 73, surprised many when he announced that he would not seek re-election. He has been Herndon’s delegate in the 86th district since 2002.

Rust has lived in Herndon since 1965 and graduated from Herndon High School.

Rust served on four committees including Commerce and Labor, Education, Transportation, and Science and Technology Committees in the House of Delegates and chaired the Joint Commission on Technology and Science.

Rust was an advocate for transportation improvements, and, as an engineer, frequently interpreted technology for his colleagues.

Rust received a standing ovation from the Assembly when he made his announcement. “It’s been a true honor to serve with you, members of this body, and I wish you the best as you continue to serve the Commonwealth of Virginia and the citizens of Virginia,” said Rust.

“He was always a gentleman, courtly almost,” said Curtis. 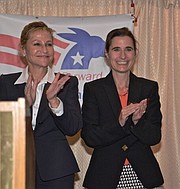 Celebrating election 2015: From left, Sheriff Stacey Kincaid and Del. Jennifer Boysko (D-86). Boysko’s election brings a Democrat to the district for the first time in many years.

Dranesville Supervisor John W. Foust (D) was reelected to the Board of Supervisors for his third term, beating first time candidate Jennifer Chronis (R). Foust has served on the Board the last eight years.

“I’m proud of the fact that after eight years people know me pretty well and know how I conduct myself as supervisor. I’m honored that they give me another opportunity,” he said.

Election night, Boysko was greeted by thunderous applause as she joined her Assembly colleagues on stage at the Democratic victory party. “It’s already been an incredible learning experience,” said Boysko, in an election night interview after election results came in.

“I’ve talked to literally thousands of people in my district, listening to what they need, what are their concerns,” she said.

Boysko served as Foust’s legislative aide, and worked on many Herndon issues.

“She’s an amazingly hard worker, she’s smart, she cares about people and doing great things, and she’s in public service for all the right reasons,” said Foust.

Vargas, Boysko’s opponent received large, late infusions of campaign money from Republicans, and had a total of $705,323, funding many mailers and TV commercials attacking Boysko.

Herndon's Council adopted an ordinance March 10 so Herndon's next Town election will be held in November 2016. Herndon's local elections had taken place in May since the Town was incorporated in 1879.

Herndon Town Council approved the change by a 4-3 vote. "Change is really hard. It's hard in business, it's hard in personal life, it's hard in policy. It's really hard so I absolutely recognize that. But the cornerstone of democracy is participation," said Jennifer Baker, vice mayor on the Council.

"When you know better, you do better," Baker said. "May [elections] made a lot of sense for a long time. But we've done a lot of research and because of that I feel very convinced that we now know November will be better choice going forward."

Hundreds voiced opinions during four public hearings in November and December and by e-mail and written testimony to the Council.

Some residents remained convinced that town elections should be separate from federal and state elections to allow focus on town issues.

"If we stop and ask for a referendum on everything we do in Town, we will never get anything done," said Councilmember Sheila Olem.

Resident Arthur Nachman told Herndon's Town Council that their actions afterwards would be just as important to the Town's future as their actual vote.

"After the vote is taken, you have to be united," he told Herndon's seven councilmembers. "You are now representing the ordinance."

Summer vacation turned into a time of mourning for the Herndon High School community and band community.

Texas Highway Patrol troopers “were dispatched to a wrong way crash on highway I-30” at approximately 1:50 a.m. on Friday, Aug. 9, according to police reports.

Alumni Kyle Mathers, 19, Holly Novak, 18, and Dale Neibaur, 19, were killed immediately when Kenneth Frazier, 78, drove the wrong direction on the highway in Greenville near Dallas.

“We think of Herndon High School as one big family, and we mourn the loss of these three young people who had such promising futures,” said Herndon Principal William Bates “They were wonderful kids who were actively involved in the Herndon school community. They were a positive influence on their peers and respected by their teachers,” he said. “The Herndon community is devastated and hurting. Please keep the families of these students and all of us who have been impacted in your thoughts and prayers.”

The three were travelling to Texas for a gaming conference in Austin with classmates Kevin DiCicco and Hannah Galbraith.

A candlelight vigil was held at Trinity Presbyterian Church on Dranesville Road in Herndon. “We send our prayers to Kevin and Hannah for their recovery,” according to Herndon’s Band webpage. “They were great leaders, role models and friends to their fellow band members, and they will be missed by each and every one of us.”