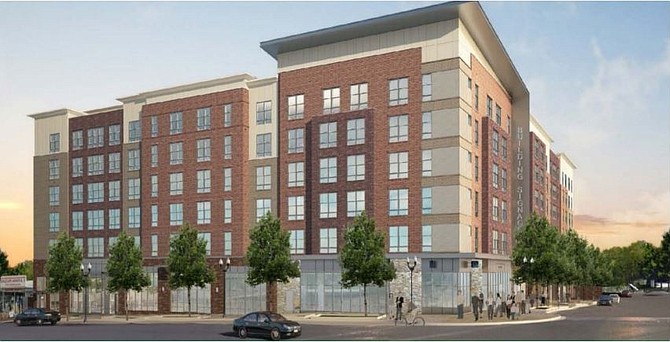 The project is anticipated to cost $68 million, including land acquisition. The property was purchased from the Arlington Presbyterian Church for $8.5 million at a 20 percent, or $2 million, discount off of the appraised value. However, the county will only be asked to provide $18 million in loans to the APAH. Two thirds of the other funding comes from state and federal sources. APAH is currently requesting $29 million in funding from Federal Low Income Housing Tax Credits.

The proposal did have some detractors. Some citizens criticized the county for concentrating its affordable housing development in South Arlington.

“Schools in South Arlington already have the highest levels of students receiving free or reduced price lunches,” said Elizabeth Odar. “If you approve this project, you show that you also approve of the continued socio-economic segregation of our county and our schools.”

John Reeder representing the Arlington Greens opposed Gilliam Place, saying that the County Board should instead use the $18 million for rental vouchers to be spread across the county.

Odar and Reeder’s criticisms of the plan carried some merit to County Board member John Vihstadt, who said the County Board needed to look more into spreading out the concentration of affordable housing throughout the area. County Board member Walter Tejada agreed, but argued that this objective shouldn’t count against the current opportunity.

The majority of the feedback from the audience was approval. Holly Bray, chair of the Housing Commission, said the project had been unanimously approved at its meeting.

Chris Fornash, chair of the Planning Commission, reported that they had also unanimously approved the project, but recommended that the board look into a long range, 10-year view of architecture along Columbia Pike.

For many of the Arlington residents, the approval of Gilliam Place was deeply personal. Miles Townes, who lives nearby, said he’s seen his neighbors squeezed out over the years by increases in property rates and rents. Townes joined Arlington Presbyterian Church after he heard about the work they were doing in helping to transition the property into an affordable housing neighborhood.

“We’ve watched a great number of luxury, high rise condominiums going up in the area,” said Townes. “The need for affordable housing is growing on [Columbia Pike].”

Elizabeth Garcia, who moved to Arlington from El Salvador in 1980, said she’d seen a similar push over the years.

“We are doing OK, but many of our neighbors are not,” said Garcia. “We love Arlington, and we want our daughter to be able to live here once she graduates school.”

Viviana Novillo, a local teacher, said she’s seen parents forced to change schools because rents in Arlington became unaffordable. It was a similar story repeated over and over by the Arlington residents advocating for Gilliam Place.

The Rev. Tara McCabe, a minister at the Arlington Presbyterian Church, said that she had celebrated thanksgiving this year with local Mexican and Turkish families at her young son’s suggestion.

“We relished in the awkwardness of language and the joy of sharing our home,” said McCabe. “This happened because of our economically diverse Arlington, let alone racially and ethnic diversity. I’m a Barcroft parent, PTA president, Presbyterian minister and a leader in V.O.I.C.E. and Mi Voz Cuenta, and I am proud to live in this community because this is how I was raised. We are complicated and beautiful, just like the first Thanksgiving.”

Ultimately, the County Board agreed.

“[We are] making a diverse place for a set of people to have a higher quality of life,” said County Board Chair Mary Hynes. “We don’t get to say that every day. Thank you, to all of you in the room, who stuck to this.”