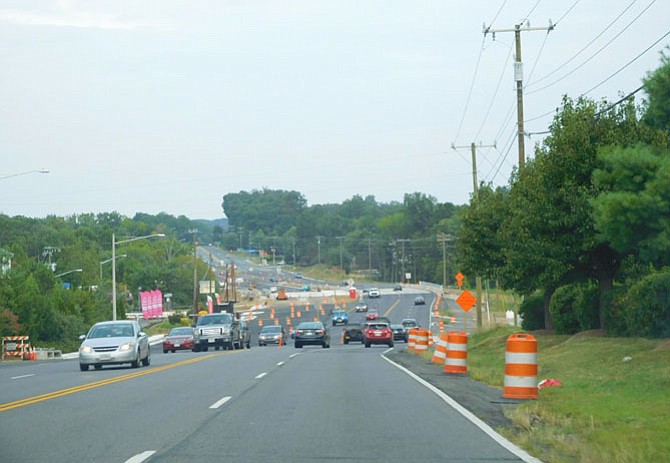 Several local road projects are either underway, in the pipeline or nearing completion. Below are the details:

It complements the I-66/Route 28 Interchange and, in conjunction with other road projects, would complete the Route 28 Corridor through the entire county. This project includes intersection improvements, as well as pedestrian and bicycle facilities. Preliminary engineering should start between now and January 2017.

A large development just south of the county line is expected to exacerbate existing congestion. So this widening reduces significant congestion between Prince William and Centreville. And as a transportation corridor of regional significance, it would improve access to Dulles International Airport, Reston and Herndon.

This project extends Poplar Tree Road across Route 28 from Stonecroft Boulevard to Walney Road. It also involves construction of a new access road to E.C. Lawrence Park and reduces congestion on both I-66 and Route 28.

*Alternate 2B offers direct access between Route 28 north and I-66 east/west.

Preliminary site work on the drainage culvert for the roundabout is underway along Pleasant Valley Road, across from Cox Farms.

VDOT is currently replacing the Route 29 bridge over the Little Rocky Run stream in Centreville. Besides improving the bridge, itself, the project will also result in a new sidewalk and shared-use path. The new bridge will go from .2 miles east of Pickwick Road to Union Mill Road and will be just under a half-mile long.

It will be built six lanes wide to accommodate future traffic, but will initially be striped for four lanes. A 16-foot-wide, raised, grass, median strip will separate north- and southbound lanes. Each outer lane will be 15-feet wide, with the outermost three feet earmarked for bicycle riders.

On the bridge’s south side, a path will connect to existing trails. The north side will have a 5-foot-wide sidewalk connecting to the Faircrest community and existing sidewalks. Estimated cost is $17.7 million and anticipated completion is this October.

The existing, Walney Road bridge over Flatlick Branch is disintegrating structurally and surpassed its life expectancy some 18 years ago. So VDOT is replacing it with a wider, sturdier and safer bridge.

The new bridge will have a four-lane capacity with bike lanes. Walney Road will also be widened from two to four lanes from 250 feet south of Mariah Court to Willard Road.

In addition, the downhill curve on north-south Walney will be smoothed out significantly to make it descend gradually. The road will also be raised 10 feet higher in the area where it currently dips down as drivers leave the bridge, for better sight distance.

The old bridge is now closed and a detour is in place through the summer. The goal is to complete the new bridge by the end of the year. Estimated cost is $15.5 million.

Cars on Braddock Road drive toward the intersection where the roundabout will be built.

VDOT will be building a 90-foot-wide roundabout to improve traffic flow at the Braddock/Pleasant Valley roads intersection by Cox Farms in Centreville. Fort Myer Construction Corp. won the contract to do the work. Estimated project cost is $5.8 million, with completion anticipated by spring 2016.

Steve Udzinski, with WBCM Highway Construction – Fort Myer’s primary designer – explained each phase of the project. Phase one, he said, is “to do the drainage culvert and ditch off of the roadway, so it shouldn’t impede traffic. We’ll also do temporary paving along Braddock and Pleasant Valley roads to be able to later maintain two lanes of traffic on these roads in all directions.”

During phase two, he said, “We’ll maintain the existing traffic patterns north of Pleasant Valley Road.” He also noted that some phases could take anywhere from a couple weeks to a couple months.

Udzinski said phase three will involve “switching traffic to other lanes, during nights and weekends, to the west side of Pleasant Valley Road while Braddock Road drivers use the temporary pavement. There’ll also be right-turn construction, plus curb-and-gutter work along Pleasant Valley.”

In phase four, Pleasant Valley traffic will be on a shifted alignment. But motorists on Braddock will have been shifted to the south. Phase five will feature the actual construction of the roundabout.

“Barrels will delineate the work-zone areas,” said Udzinski. “We’ll build the center island and then the splitter islands and then do the final pavement and markings. We’re also doing a trail connection to the intersection. There’ll be a crosswalk across Braddock Road and a sidewalk along the Cox Farms property.”

This project provides an alternative to Route 28 that goes from Centreville to the Westfields Corporate Center. It received partial funding for an alignment study, environmental analysis and preliminary engineering. Cost estimate: $81.55 million; amount approved by FCDOT: $5 million.

Construct a four-lane divided road between Stone Road at Route 29 and New Braddock Road. The work includes curb and gutter, a 5-foot-wide concrete sidewalk on the east side and a 10-foot-wide shared-use path on the west side of Stone Road.

Construct a bridge over I-66 and another bridge over Big Rocky Run. Re-stripe westbound New Braddock Road to provide two, through travel lanes. This overpass could reduce congestion at the I-66/Route 28 and I-66/Route 29 interchanges. In addition, a future Metrorail station near this site is listed on the county’s Comprehensive Plan.

This project provides pedestrian facilities on the north side of Route 29 and widens Route 29 in this area from four to six lanes. It complements the VDOT bridge-replacement project at Little Rocky Run and completes the widening of Route 29 from Shirley Gate Road to Centreville.

It’s currently the last segment of Route 29 between the City of Fairfax and Centreville that’s not six lanes, so this work would eliminate the last remaining bottleneck. Cost estimate: $32.7 million; FCDOT approved: $25 million. Preliminary engineering could start as early as July 2018.