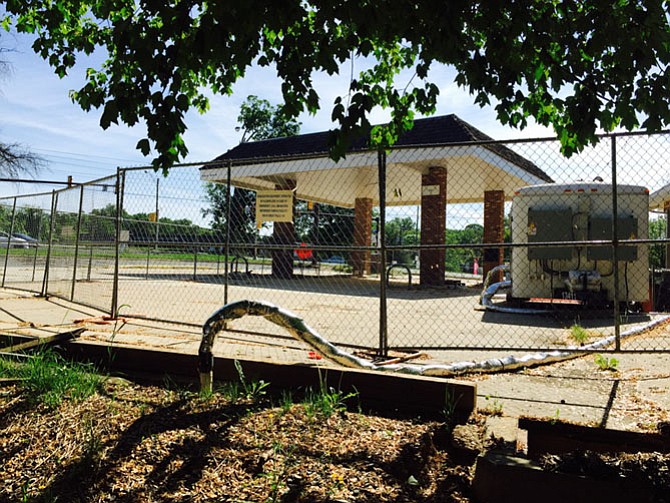 Pumping and treatment of the Exxon cleanup will continue this year. A drive-through TD Bank will eventually replace the former station on Georgetown Pike. See www.gfca.org. Photo by Ken Moore. 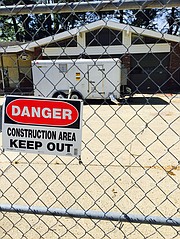 Pumping and treatment will probably need to continue for another year. A drive through TD Bank will eventually replace the former station on Georgetown Pike.

In the last three months, about 27 pounds of Methyl Tertiary Butyl Ether (MTBE) have been removed from the groundwater as a result of the leak from the former Exxon Station at 9901 Georgetown Pike. Concentrations of the chemical remain more than 10 times the target level in at least one spot.

Approximately 256 pounds of MTBE have been removed since pumping and treatment began in August 2014, according to the Great Falls Citizens Association.

“We will keep being vigilant until the problem goes away.”

“We will keep being vigilant until the problem goes away,” said Glen Sjoblom, chair of the Great Falls Citizens Association’s special committee on groundwater contamination.

The special committee of the Citizens Association reviewed the groundwater monitoring report issued for second quarter 2015 by Fairfax Petroleum and its environmental engineering contractor, Kleinfelder East. The report was received from the Virginia Department of Environmental Quality.

GFCA and Sjoblom predict that pumping will need to continue for another four quarters.

“After the end points are reached, monitoring will continue for another two years to verify no contamination will ever reach private groundwater wells in the vicinity of the commercial center of Great Falls,” according to the Great Falls Citizens Association.

LOW LEVELS OF MTBE can make groundwater undrinkable due to its offensive taste and odor, according to U.S. EPA documents.

“It doesn’t take a very big leak to cause a very big problem if you have an area that has private wells,” said Sjoblom.

EPA issued a Drinking Water Advisory that states concentrations of MTBE in the range of 20 to 40 ppb (parts per billion) or below will probably not cause unpleasant taste and odor for most people.

Keeping concentrations below that range would also address health concerns, since the EPA reported that data support the conclusion that MTBE is a potential human carcinogen at high doses.

The end point was specified by the Virginia Department of Environmental Quality as a target concentration unlikely to result in detectable levels of 1 ppb, in any private wells.

Therefore, remaining deep concentrations at some locations must be reduced by a factor of approximately 10 before treatment can be considered complete.

WHILE CLEANUP CONTINUES, the former gas station bought by Fairfax Petroleum continues to be fenced off.

“An eyesore in the middle of Great Falls,” said Sjoblom.

“My goal is to get it down as soon as possible.”

“I drove past it the other day and that was my reaction,” said Supervisor John W. Foust. “My goal is to get it down as soon as possible.”

Foust said The Board of Supervisors approved a special permit for a drive thru TD bank to replace the former gas station.

LEAKS WERE DETECTED from the vapor recovery units at the gas station in 2009, said Sjoblom.

MTBE was the gasoline additive used under direction of the EPA prior to 2006, and a leak released the chemical from the former Exxon Service station into groundwater.

The groundwater has been treated by pumping it out for air stripping and by charcoal filtration in a special treatment trailer, and the treated water is released below discharge limits to the storm drain.

Pumping and treatment of groundwater from wells on the original site began in August 2014 in accordance with the Department of Environmental Quality Corrective Action Plan.

The cleanup has “significantly reduced” the concentration of Methyl Tertiary Butyl Ether (MTBE) in groundwater, according to GFCA.

“The numbers have been coming down quite a bit but we are still concerned about the area across Walker,” said Sjoblom.

The Great Falls Citizens Association wants concentrations at all wells to be reduced to the lower end point, approximately 10 times. The citizens association believes “another recovery well, across Walker Road from the original site, is needed to accomplish treatment of the entire contamination plume,” according to Great Falls Citizens Association documents. “Fairfax Petroleum committed to this in applying for the Special Permit for the TD Bank.”

Pumping continues to proceed at approximately 5-8 gallons per minute, for a total of 2.7 million gallons.

“The goal should be, when in doubt, to overcorrect,” said Foust.